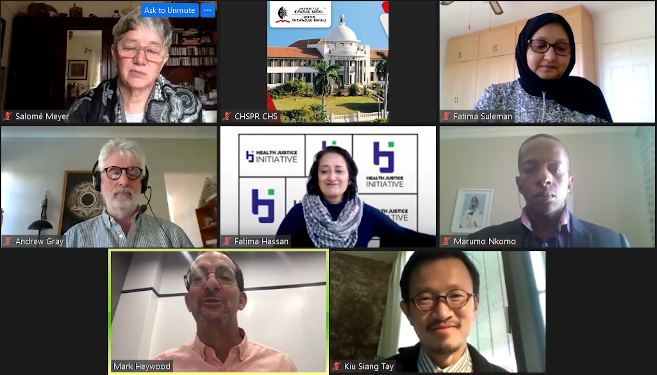 South Africa’s inequitable health system is unsustainable in its current form while a lack of transparency in costing is preventing people from receiving life-saving medicines.

That was the general consensus of health experts taking part in a webinar hosted by UKZN and the World Health Organization Collaborating Centre (WHO CC) for Pharmaceutical Policy and Evidence Based Practice.

Experts contributing to the webinar - titled: Inequities to Access to Cancer Medicines in South Africa - included (1) Project Manager at the Access to Medicine Campaign Dr Salomé Meyer, who presented on: Local Perspective and the Need to Re-think/Re-design/Re-engineer; (2) WHO’s Dr Kiu Siang Tay, who spoke on: Providing a Global Perspective of the Cost of Cancer Medicines; (3) , the Director of the Health Justice Initiative Dr Fatima Hassan who focused on: The Legal and Human Rights Imperative to Address Inequities in Medicine Access; (4) WHO CC for Pharmaceutical Policy and Evidence Based Practice Professor Fatima Suleman of UKZN on: The Imbalance of Medicine Access and Possible Solutions to Ensure Equitable Access, and (5) Director: Legal - International Trade & Investment at the Department of Trade, Industry and Competition,) Dr Marumo Nkomo, on Patent Law Reform - Where to From Here to Ensure Equitable Access?”

Meyer said COVID-19 had served to further highlight the inequities in the South African health system and that ‘availability’ of medicines needed to be coupled with ‘affordability’ which would then translate into ‘access’ to medicines for everyone in need.

Meyer said the Cancer Alliance had produced a report in 2017 titled Patent Barriers of Cancer Medicinesthat showed patents blocked the availability of more accessible generic medicines. She said the report stated that only seven of the 21 registered cancer medicines available in the private sector were available in the public health sector.

He said the report highlighted how the high pricing of medicines had generated profit for pharmaceutical companies far greater than their research and development costs. The report revealed an inconsistency in pricing from country to country with lower availability of medicines in lower-income countries.

Suleman said nine percent of adult mortality in the world was caused by cancer with the projection that the incidence would get higher over the next 10 years. This was partly as a result of the high cost of medicines, the required care for patients as well as unfactored costs of chemotherapy such as buying wigs and securing transport to therapy centres.

She referred to a WHO report that indicated that ‘a course of standard treatment for early-stage human epidermal growth factor receptor 2 positive (HER2+) breast cancer (doxorubicin, cyclophosphamide, docetaxel, trastuzumab) would cost about 10 years of average annual wages in India and South Africa’.

The provision of new-generation immunotherapy drugs such as ipilumumab had a price tag of R1m, while trastuzumab costs R25 000 a treatment - something completely unaffordable for public-sector patients.

Suleman said the cost of a one-month treatment (40mg) of Irinotecan (Campto) was equal to about 32.3 days of wages for the average person. ‘What happens to patients who cannot afford the medicines?’

She suggested that southern African countries collaborate to increase their purchasing power of the medicines. Greater pricing transparency was key to determining a fair price.

Suleman said statistics showed that registered cancer medicine meant to extend life, extended a patient’s life by an average of only 2.7 months.

Hassan emphasised there was a need to look at Section 27 of the Constitution, which affirms that everyone has the right of access to health services. ‘However, it is not enough to just have access to services, people also need to have access to treatment,’ said Hassan.

‘The laws and policies we have are not translating into affordable access to medicines; we have seen this not only with cancer, but also with COVID over the last few months. This undermines dignity as well as civil and political rights contained in the Constitution.’

Looking at South African domestic patent laws, Hassan said Parliament had still not passed patent laws enabling the government to reduce pricing. ‘This was why everyone needed to support the #fixthepatentlaws campaign,’ she said.

The expert panel maintained that cancer was a public health crisis, however, it could be treated and did not need to be a death sentence.

They also highlighted that profiteering from medicines was a human rights violation and denied people life-saving medication and care.

‘We cannot have patents on medicines that save lives,’ said Hassan.