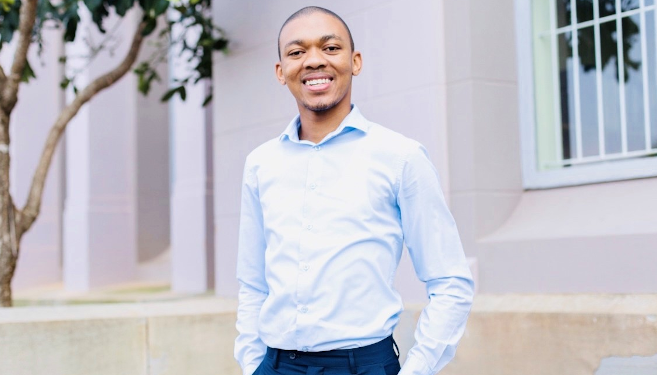 Mr Mzwandile Zulu says his appointment as a New Generation of Academics Programme (NGAP) lecturer within the Mathematics Education Discipline at UKZN’s School of Education is a dream come true.

‘Since I decided to pursue academia, UKZN was always my Higher Education Institution of choice,’ said Zulu.

Zulu was on a UKZN Council-approved Talent Excellence and Equity Acceleration Scholarship (TEAEAS) and has recently been appointed into the NGAP programme funded by the Department of Higher Education and Training (DHET) with the intention of supporting universities to recruit new academics and transform their academic profile. This is a permanent appointment which provides a number of opportunities for Emerging Academics to grow their career in academia, complete PhD studies and rise through the ranks.

He said he has always been disciplined, hardworking and goal driven and becoming an academic was something he had yearned for. ‘In third-year, I started tutoring several Mathematics Education modules and it was then I understood what it meant to be an academic. I was engaging with academics and assisting in facilitating for their modules.’

Zulu said he was an average student in high school but his love for Mathematics is what made him stand out from the rest. During his matric year, he was motivated to work hard to ensure he got accepted at UKZN. Passing with a B in Mathematics had been key to being accepted for a BCom in Accounting degree.

Speaking about being on the TEAEAS programme, Zulu said when he received the news that he had made it, one of the conditions of the programme was he had to be a full time student. At the time he was already employed as a high school mathematics teacher so the requirement was initially of concern to his family.

‘Throughout my journey, I have constantly been updating them on what I am doing and why I am doing it. It was a bit of a challenge though when I told them that I was resigning from the Department of Basic Education to be a full-time student but after explaining to them what I wanted to achieve, they supported me from there on.’

He added: ‘The Talent Equity programme brought me even closer to realising my dream of becoming a UKZN academic. The kind of support offered by the Programme allowed me to flourish and smoothly transition from the school working environment to the University setting.’

Zulu has received a variety of accolades during his academic career, among them several merit certificates, Dean’s Commendations and the Golden Key honorary certificate. As a high school mathematics teacher, he was recognised as one of the KwaZulu-Natal team leaders for the 2019 International Mathematics Competition hosted in South Africa. ‘We were working with an NPO (CASME), which is dedicated to improving the country's performance in Mathematics and Science,’ he added.

He thanked his supervisor, Professor Vimolan Mudaly, who he says has been like a father and a friend since 2017, the Mathematics Education staff for their support, and his ‘greatest inspiration’, Professor Thabo Msibi.

Speaking of his time at the TEAEAS Programme, Ms Busisiwe Ramabodu Director: Human Resources Development, remembers Zulu as a very pleasant and focussed student who has a passion for Mathematics. She said, ‘We are very excited that Mr Zulu has joined the UKZN team on a full-time basis especially because Mathematics is one of the scarce disciplines and we wish him all the success. It is pleasing to see that our programmes for Emerging Academics are beginning to feed into each other as was initially intended. Our sincere thanks to Prof Thabo Msibi for his commitment in nurturing future academics.’