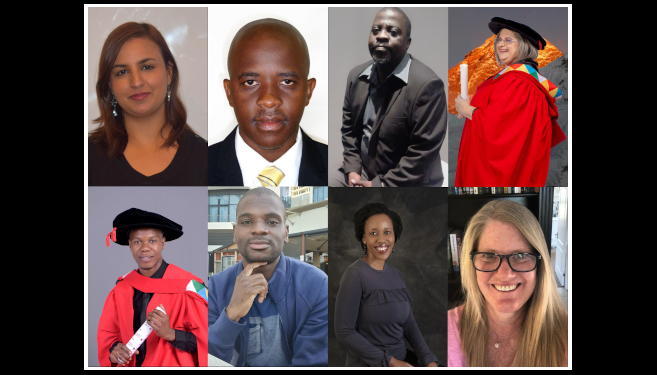 Eight staff members in the College of Law and Management Studies have made UKZN proud by graduating with master’s and doctoral degrees.

Finance Lecturer in the School of Accounting, Economics and Finance Dr Faeezah Peerbhai graduated with a PhD in Finance for her study titled: The Impact of Exchange Traded Funds (ETF) on the Microstructure of their Constituent Shares: A South African Case.

Peerbhai established that once a share of a small firm is included in an ETF, it increases the visibility of that firm’s listing on the Johannesburg Stock Exchange, resulting in greater liquidity and information efficiency in the share. The study concluded that regulators should actively encourage growth in the South African ETF market by relaxing pension fund regulations and revising the taxation environment to ensure that the ETF market becomes more competitive as an asset class.

Peerbhai says while her studies were not an easy journey, she persevered and succeeded. ‘I fell pregnant with my second child during my studies and had to suspend registration which interrupted my momentum. Having to juggle work, school and two toddlers during a pandemic was probably the most stressful thing I’ve ever had to do.’

With the support of her family, supervisor and colleagues she stayed the course.

‘After completing my LLM degree in 2015, I published numerous articles on public order offences and I felt that my public order expertise and knowledge would be complete if I pursued a PhD in the related field of state security,’ said Khumalo.

His thesis investigated the “security laws’ interpretation regime”, which is a collection of techniques used to bolster the interpretation of usually broad and vague state security laws in a way that upholds and protects the rule of law and human rights.

Said Khumalo: ‘The COVID-19 pandemic made the study even more relevant because, similar to state security laws, the laws of the State of Disaster - declared in response to the pandemic - are also broad and vague, possibly resulting in violations of the rule of law and human rights. Therefore, the tools of interpretation suggested in the thesis are relevant not only for interpreting state security laws, but also the laws of the State of Disaster.

‘Completing my PhD thesis was very fulfilling, confirming academia is the correct career path for me. I did my PhD in (a period of) almost five years while I was in full-time employment as an academic, but at no point did I ever feel like giving up. The key has simply been to do what I love most,’ he said.

Supply Chain Lecturer at the School of Management, IT and Governance (SMIG), Dr Eric Ncube says his PhD achievement is a significant milestone that he had not thought possible. ‘I am the first in the family to get a doctorate, setting a good example for my grandchildren. I wish my parents were still alive to witness this achievement,’ said Ncube.

His doctoral research focused on changes in tastes and preferences of library patrons to supply chain systems and processes. Libraries of the 21st Century have to be customer-centred in processes such as planning, sourcing, and delivering which all involve the use of technology.

‘I have started publishing from my research for this project under the guidance of my supervisors, Dr Thokozani Mbhele and Professor Maxwell Phiri, who have been instrumental in my doctoral journey,’ he added.

Student Counsellor and Counselling Psychologist at CLMS Student Support Services, Dr Margot Sennett Freedmanwho graduated with doctorate in Philosophy for her study titled: I Owe my Recovery to the Group: How Addicts Learn to Recover: A Case Study of an Addiction Aftercare Group.

The study boldly tackles the topic of addiction recovery through an analysis of group dynamics and mechanisms that facilitate regular members to maintain their recoveries. Her ground-breaking study examined aspects of group membership, highlighting the importance of a safe space where engagement with guilt, shame, anger and the physical aspects of addiction were essential. Her thesis developed an interactional model of global reach, significant for future practices of recovery from addiction.

Dr Sennett Freedman is married to the School of Law’s Professor Warren Freedman. They have two daughters, Jessica and Emily.

Auditing Lecturer in the School of Accounting, Economics and Finance, Dr Siphiwe Mqadi who graduated with a doctorate in Accounting says the qualification provides him with a unique opportunity to apply creativity to the Accounting profession through research and teaching.

‘As scholars, we always strive to seek new or enhanced techniques for solving problems,’ said Mqadi. ‘My research looked into what audit committees are doing and can improve on and/or do differently to support municipal governance in reaching its intended goals,’ said Mqadi.

He dedicated his achievement to his late parents who died during his studies. ‘Losing both my parents during my PhD journey was really tough. Grieving but still having to find the strength to complete my research required major sacrifices and mental adjustment.’

Mqadi thanked his supervisors, Professor Msizi Mkhize and Dr Bomi Nomlala for their support and feedback throughout the research project. He also thanked Professor Anesh Singh and Professor Mabutho Sibanda for their much-needed encouragement and guidance.

Lecturer in Public Governance at the School of Management, IT and Governance, Dr Jabulani Nyawo, has graduated with a PhD in Public Administration.

Born in the small town of Jozini in northern KwaZulu-Natal, Nyawo says he pushed himself to achieve what he did not think was possible and is now the first in his family to hold a doctoral degree.

Nyawo’s research was aimed at establishing efficient ways for agri-smallholders to stimulate local growth as well as business growth and development. His findings suggest that neither municipalities nor provincial extension services provide sufficient assistance for agri-smallholder producers to access municipal markets, mainly because municipal development plans are not integrated with those of the province.

‘Doing my doctorate was stressful as I had to find a good balance between my studies, a full-time job and family responsibilities,’ said Nyawo.

He thanked his family and friends for always being there for him and also his supervisor, Professor Betty Mubangizi for her support and guidance.

For Student Academic Administrator in the School of Management, IT and Governance Ms Sehapi Kolitsoe, being promoted to higher positions, and improving her skills in research were her motivation for pursuing a Master of Commerce (Information Systems and Technology) degree.

Kolitsoe says she wanted to gain experience and specialised knowledge through academic research and the degree provided exactly that.

Her study investigated the impact of social media on educational institutions, finding that it (social media) is very useful and could assist in teaching and learning.

Donnelly’s study investigated factors that determined creditworthiness among a group of KZN Midlands commercial farmers and found four significant predictors of credit risk: the category of the farmer - part-time farmers were found to have lower credit risk than their full-time counterparts; the proximity to the nearest urban centre - the further away the farm operation from the nearest urban centre, the lower the credit risk; reliance on non-farm income - the more reliant on farm income to maintain a standard of living, the lower the credit risk; and the funding institution used by the farming operation - participants not funded by a commercial bank tended to be more creditworthy than those funded by a commercial bank.

Donnelly took a six-month sabbatical last year (2020) to get the research done, however during that time, her mother died from cancer, making the journey far more difficult.

She thanked her supervisor, Professor Paul-Francois Muzindutsi who was ‘unbelievably patient and generous with his time and experience, and supportive throughout the process.’

College Dean of Research, Professor Colette Muller congratulated the staff members, saying: ‘It has been a great privilege for colleagues in the College to support all students completing their postgraduate studies. We are extremely proud of all of our graduates, and particularly our colleagues who have succeeded to finish their degrees under the very trying circumstances which characterised the 2020 academic year.’