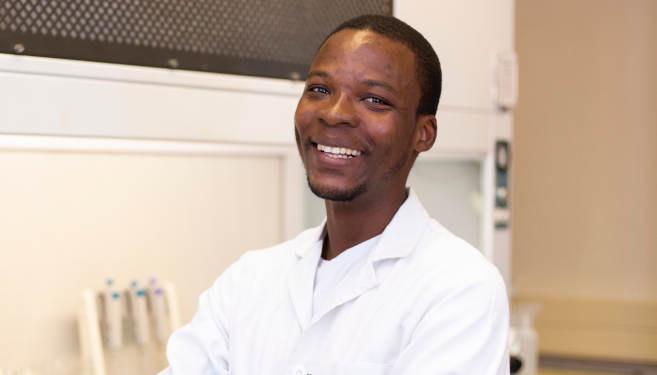 Mr Siyabonga Gumede graduated with a Master of Medical Sciences in Medical Microbiology.

Wastewater Treatment Plants are a Reservoir for Antibiotic-Resistant Bacteria

This could pose a public health threat should they be spread to receiving surface waters because of sub-optimal water treatment. Mr Siyabonga Gumede, a member of UKZN’s Antimicrobial Research Unit, conducted a study titled: Phenotypic and Genotypic Characterisation of Extended-Spectrum ß-Lactamase-Producing E. coli Isolated From Wastewater Treatment Plants in the uMgungundlovu District, Kwazulu-Natal, which earned him a Master of Medical Sciences in Medical Microbiology.

Gumede’s study aimed to phenotypically and genotypically characterise extended-spectrum ß-lactamase (ESBL)-producing E. coli from the influent and effluent of WWTPs in the uMgungundlovu District. ESBLs are enzymes that break down the broad spectrum 3rd and 4th generation cephalosporins that are categorised as “watch” and “reserve” antibiotics on the World Health Organization’s essentials medicine list.

The study found that ESBL prevalence was phenotypically evident in the isolates, 77% of which were confirmed to carry ß-lactamase genes. Alarmingly, 73% of the isolates were multidrug-resistant (MDR), displaying resistance to one or more antibiotics from three different antibiotic classes, and only two isolates were susceptible to all antibiotics. Resistance to ampicillin (94%), amoxicillin (88%), trimethoprim-sulfamethoxazole (79%), and tetracycline (70%) was the highest.

Gumede, who grew up in rural Mandeni said: ‘The results of the study are alarming and raise public health concerns due to the high risk of exposure to contaminated surface waters used for domestic purposes by impoverished communities. Substantial quantities of ESBL-producers are received by WWTPs and are subsequently released along with effluent discharge into surrounding surface waters. This represents a potential dispersion route of ARB into multiple ecological niches.’

‘Siya’s work is exceptional as it provides evidence for the need to improve wastewater treatment networks within South Africa to avoid pollution of water bodies. His findings are also a call for measures to prevent the spread of antimicrobial resistance through polluted water, especially in resource-poor settings in South Africa,’ said Dr Akebe Luther King Abia, Gumede’s supervisor.

Gumede plans to register for a PhD. He enjoys playing soccer, listening to music, and reading books and is keen to learn to play musical instruments.