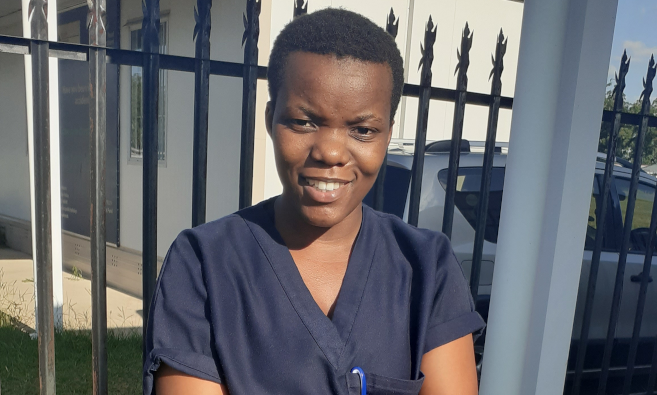 Gone too soon: The late Ms Charlotte Dube who was described as a “gem”.

Ms Charlotte Dube will graduate with a Bachelor of Physiotherapy despite being tragically killed in a violent taxi incident on 10 April 2021, a month before her graduation ceremony.

Staff from the Discipline of Physiotherapy paid an emotional tribute to Dube - who was to be awarded her degree first class.

Dube grew up in rural Nquthu and was raised by her grandmother. Her best friend, Ms Anza Magadani recalled her childhood reflections: ‘She often mentioned to me that her grandmother shaped who she was which is to be passionate about education. She used to tell me that her grandmother would literally drag her to school when she didn't want to go, especially when it was raining or if it was too cold. She pushed her to be her very best. Unfortunately, her grandmother died in 2018 before she could see the success she groomed, but Charlotte continued to work hard in order to make her (grandmother) happy and proud.’

Dube attended Ezichole Secondary School where she participated in poetry and storytelling. After completing Grade 12, she joined UKZN where she studied towards a Bachelor of Sciences degree in Biological Sciences and was later nominated for a Golden Key International award. In 2017, she applied for a Bachelor of Physiotherapy degree.

Staff in the Discipline of Physiotherapy said in their email notice to the UKZN community: ‘Charlotte came to our Department from another academic discipline, which is an exceptionally hard route to take into the profession, as very few students are selected this way. This demonstrated her love for physiotherapy which she continued to show throughout her four years in our department. She was always the first student to volunteer for extra-curricular events and always encouraged and motivated her fellow classmates. She left her mark on qualified physiotherapists as well, with a number of staff from the hospitals where our students did their clinical placement contacting us with their memories of Charlotte. She was always near the top of her class and would have been graduating next week, with her degree to be awarded in first class (above 75%), a very rare achievement in the Discipline of Physiotherapy. Her excellent academic ability resulted in her being offered a scholarship to return to UKZN to do her master’s and she was already in discussions with us regarding her chosen topic.’

Dube participated in many events at UKZN and also assisted the College of Health Science’s Public Relations team in Open Days where she promoted the Discipline of Physiotherapy to high school learners.

‘I would say she was an entertainer,’ said Magadani. ‘There was never a moment where you could be angry or sad around Charlotte. She made sure that everyone is smiling and laughing. She was the one responsible for organising trips and catch-up sessions amongst her friends. She made jokes about anything and everything. She made friends in almost all the health departments in UKZN (something which is very rare) because she was someone you could easily talk to. Her greatest talent that even the Physiotherapy department got to experience, was her ability to imitate every lecturer - their tone, facial expressions and body movements when lecturing. She was a gem. Her motto in life was “Invest in yourself, invest in your mind, life owes you nothing. In the meantime, never stop having fun (ungazincishi i-nice life)”.’

At Dube’s funeral, staff from the Discipline said: ‘Her passing is a huge loss to our profession as we have absolutely no doubt that she would have gone on to be an inspirational leader and mentor in the field of South African physiotherapy. She was so dear to us and leaves a huge gap in our hearts. We send our deep and sincere condolences to her family and want to thank you for letting your daughter be part of our family for four years. Thank you to Charlotte for gracing our lives with her presence. We are so fortunate to have had the opportunity to have known you. Lala ngoxolo Charlotte, you will be greatly missed.’

In honour of Dube, the Discipline has created a ‘Charlotte Dube Award’ for the student that best exemplifies the Physiotherapy Profession. This year’s recipient of the award is Mr Thabang Ratopola.