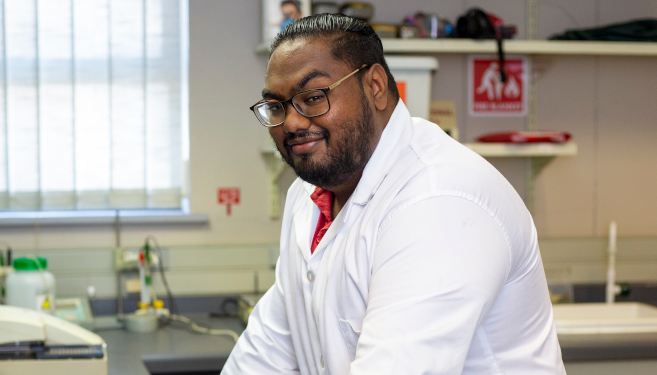 Life has not been easy for Pietermaritzburg resident, Mr Mikyle David.

Twenty-three years ago, he was diagnosed with bilateral femoral dysplasia. His parents were faced with the choice of amputating both his legs or placing him in a wheelchair for life.

‘Despite my condition presenting a monumental challenge, I was dedicated, worked hard and with the help of my parents, persevered to overcome it. School (Heather Secondary School) came with its own adversity and challenges as educators and students alike saw me as “different”, whilst this was “normal” for me. There was something my mother once said to encourage me: “God may have taken away your legs but he gave you a big brain instead”, words that have stuck with me to this day. I used my so-called “big brain” to excel academically in school and at university,’ said David.

Supervised by Professor Anita Naicker, David investigated the concentration of adipsin and C9 in HIV-associated preeclampsia (PE). The study identified a strong correlation between the up-regulation of adipsin and PE and found that adipsin is a promising biomarker as a diagnostic tool for PE (a pregnancy-related hypertensive disorder that usually occurs after 20 weeks of gestation). It is a significant public health threat in both developed and developing countries that contributes to maternal and perinatal morbidity and mortality.

David, who describes himself as quite a “foodie”, enjoys eating out, spending time with family and friends and playing cricket. He is currently pursuing a PhD and is determined to achieve his goal of becoming a lecturer and great researcher.

He said: ‘This may sound very cliché, but it’s true: Life can be tough at times and there will always be obstacles in your way, but good old-fashioned hard work and determination are key.’