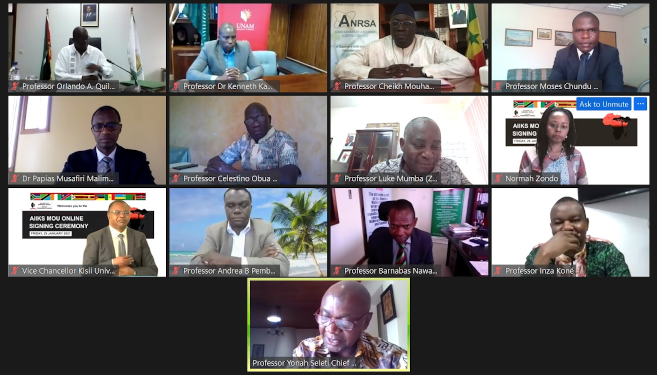 Sixteen African universities and research institutions signed a memorandum of understanding in a virtual ceremony hosted by UKZN to cement their partnership in establishing the African Institute in Indigenous Knowledge Systems (AIIKS).

Speaking at the ceremony, Honorary Professor in Electrical Engineering at UKZN, Professor Nelson Ijumba cited examples of African countries’ use of homegrown solutions to respond to the COVID-19 pandemic. He noted that Africa has the solutions and knowledge systems required to solve its own problems.

Ijumba defined the essence of AIIKS as ‘having the courage and confidence to say, our knowledge systems can participate in the global knowledge economy in their own right’ and noted the need to coordinate and develop strong partnerships to promote indigenous knowledge systems (IKS).

Deputy Vice-Chancellor and Head of the College of Humanities, Professor Nhlanhla Mkhize welcomed everyone to this important occasion. He observed that UKZN is the hub for the Department of Science and Innovation-National Research Foundation’s (DSI-NRF) Centre for Indigenous Knowledge Systems (CIKS), a partnership with North-West University, the Universities of Limpopo and Venda and UNISA.

Mkhize said that AIIKS will develop and drive strategies that are part of the African Union’s (AU) Agenda 2063 that seeks to achieve ‘the Africa we want’ and explained that this will ‘enable Africa to contribute to the global pool of knowledge on its own terms rather than those dictated to them.’

Guest speaker, Chief Executive Officer of the African Peer Review Mechanism, Professor Eddy Maloka said that the consortium is an opportunity to ‘build on IKS by driving our own development processes based on our world views, ways of knowing, value systems including indigenous languages and home-grown philosophies as an authentic expression of ourselves and our identities as Africans.’

He highlighted that placing IKS at the centre of the knowledge base will enable us to rewrite the history of the world and what is taught in our universities. He explained the need for a universal approach to IKS and stressed that IKS technological developments should have a transformational impact on society and humanity at large.

Maloka concluded by congratulating all those involved and pledging his support for this initiative.

In his vote of thanks, Professor Yonah Seleti, Chief Director for the DSI thanked everyone for being part of this historic event and noted that ‘history will no longer be written by the hunter; we shall write our own history as the people.’

Seleti encouraged the 16 universities that are part of the institute to be part of a community built on the spirit of Ubuntu and to be ‘characterised as a people that have built a knowledge enterprise that is excellent...because Africans also thrive on excellence without which they wouldn’t have survived up to this time.’

In closing he expressed his support for the CIKS and thanked Ms Normah Zondo, Acting Executive Director, Corporate Relations and her team for making the virtual event a success.