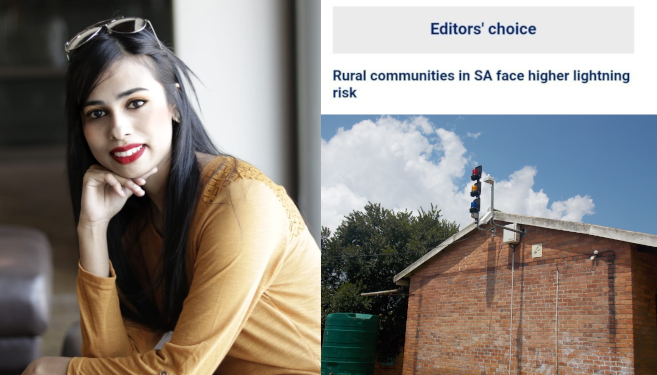 Ms Maqsooda Mahomed and the lightning warning system at Swayimane that is the focus of her research published in the South African Journal of Science.

Agrometeorological research on lightning being undertaken by doctoral candidate in UKZN’s School of Agricultural, Earth and Environmental Sciences (SAEES) Ms Maqsooda Mahomed has been selected as the editor’s choice in the January/February 2021 edition of the South African Journal of Science.

The article, titled Lightning monitoring and detection techniques: Progress and challenges in South Africa comprises a review of the latest available techniques and technologies and delves into current research in this area in South Africa and the challenges the country faces concerning lightning detection.

According to the South African Weather Service, South Africa has one of the highest incidences of lightning-related injuries and deaths, losing more than 200 lives a year to lightning strikes. Mahomed explained that the country has made significant progress in technological advances, being home to one of the three ground-based lightning detection networks in the southern hemisphere, and has improved its lightning detection and monitoring in recent years.

Despite this, rural communities in South Africa and Africa are still vulnerable to lightning, which is expected to increase in frequency as the climate changes. The country’s detection network operates at a national level, but information and warnings are not disseminated locally.

Given these realities and the fact that large proportions of African countries' populations reside in rural areas, Mahomed and her co-authors call for the integration of indigenous and scientific knowledge and the participation of rural communities that are most affected when developing early warning systems. They also note the need to determine the most effective way to use existing monitoring networks while incorporating warning dissemination to rural communities and recommend further research on the development of lightning-safe rural dwellings or shelters, particularly in lightning-prone areas.

Mahomed, an assistant researcher in the Centre for Water Resources Research (CWRR) at UKZN, received first prize for her oral presentation on this research in the SAEES sessions of UKZN's 2020 Postgraduate Research and Innovation Symposium and at the 2020 Durban Research Action Partnership Research Symposium. Her work was featured in The Mercury, where it was amongst its most-read articles and on the Women in Science Africa website under the portal’s “Head's Up” section for noteworthy news.

Co-authors of the paper are Mahomed’s supervisor Dr Alistair Clulow and co-supervisor Professor Tafadzwa Mabhaudhi, with Dr Sheldon Strydom and Professor Michael Savage. Her research falls within the uMngeni Resilience Project (URP), which in 2018 installed a state-of-the-art community-based near real-time lightning warning system (NRT-LWS) in Swayimane near Wartburg, linked to the Agrometeorology Instrumentation Mast (AIM) system to warn the school and the surrounding community about lightning strikes.

The automated system comprises an electric field meter and lightning flash sensor that disseminate warnings via audible sirens and visible lights, both on-site and with a remote server distributing SMS and email alerts. The URP aims to increase vulnerable communities’ resilience through interventions such as early warning systems, climate-smart agriculture, and climate-proofing settlements.