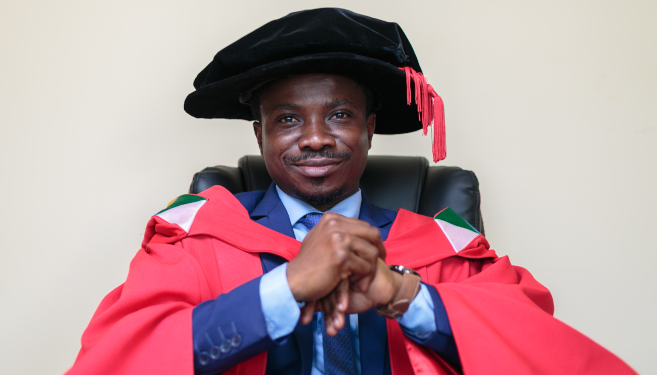 Dr Jonathan Asante graduated with a PhD in Medical Microbiology.

Dr Jonathan Asante was awarded a PhD in Medical Microbiology for his study titled: Molecular and Genomic Analysis of Clinical Multidrug-Resistant Coagulase-Negative Staphylococci from the uMgungundlovu District in the KwaZulu-Natal Province, South Africa.

His study is particularly important as it highlights alarming resistance to antibiotics by Coagulase-negative staphylococci (CoNS) found in clinical settings.

The study forms part of the ongoing work on antimicrobial resistance in UKZN’s Antimicrobial Research Unit under the directorship of Professor Sabiha Essack, the South African Research Chair in Antibiotic Resistance and One Health. Asante said, ‘Antibiotic resistance has become a subject of global interest, especially as the use of antibiotics continues to rise in both clinical and veterinary practice, making infections caused by bacteria increasingly difficult to treat. A group of bacteria referred to as CoNS are among the most recovered bacteria in microbiology laboratories. They are increasingly being recognised for the ability to cause infections that are resistant to multiple antibiotics, especially among people with compromised immune systems and those hospitalised for long periods.’

Asante collected 89 clinical CoNS isolates from three hospitals within the uMgungundlovu District between October 2019 and February 2020. Antibiotic susceptibility testing was done against a panel of 20 antibiotics according to the Clinical and Laboratory Standards Institute guidelines.

The results indicated that Staphylococcus epidermidis was the most abundant CoNS species isolated. Multidrug resistance was observed in 76.4% of isolates, with 51 antibiograms observed. The resistance genes mecA, blaZ, erm(A), erm(B), erm(C), msr(A), aac(6')-aph(2''), and fosB, among others, were detected and corroborated the observed phenotypes. A large number of bacteria studied were resistant to multiple antibiotics including ß-lactams, ciprofloxacin and azithromycin.

Asante commented: ‘The whole-genome sequence technique used enabled us to fill the information gap on molecular mechanisms of resistance and virulence, their mobilisation through mobile genetic elements and strain types and phylogenies. The study resulted in the publication of articles in reputable peer-reviewed journals, with some currently under review. This has added new knowledge to what is already known and calls for rigorous surveillance and containment measures.’

Asante, who grew up in the eastern part of Ghana, is a pharmacist by profession. His prior qualifications include a Bachelor of Pharmacy from the Kwame Nkrumah University of Science and Technology and a Master of Pharmacy (Pharmaceutical Microbiology) at UKZN.

He was inspired at an early age to pursue a career in the Sciences. ‘I have always had a passion and motivation to improve the daily lives of people through studies and research. Fascinated by my foremost research experience at the undergraduate level, I resolved to blend academia and research in my practice as a pharmacist. This, I believe will enable me to become useful to society in three main areas of life: health, education and continual knowledge acquisition or advancement through an investigation of nature. This led me to pursue a PhD,’ said Asante who enjoys watching educative documentaries, participating in sports, hiking, and spending time in nature.

‘Jonathan was the kind of student who knew what he wanted from the start and showed resilience to overcome all the hurdles during the PhD journey,’ said Dr Daniel Amoako, co-supervisor of the study. ‘His level of independence, in-depth technical knowledge, analytical thinking and problem-solving skills makes him the ideal doctoral candidate every supervisor would want to mentor. I feel proud in guiding him to realise his dream and have no doubt that he will excel in his academic career.’