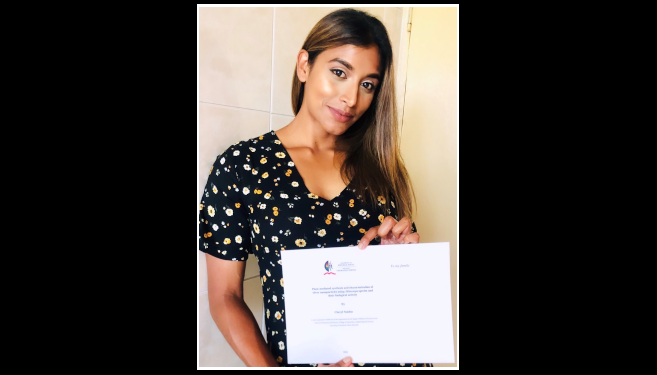 Ms Cheryl Naidoo was awarded an MSc in Chemistry.

Mimusops, an indigenous plant species found along Durban’s coastline, was the subject of MSc research by graduate, Ms Cheryl Naidoo.

The shortage of proper healthcare facilities in underprivileged communities inspired Naidoo to combine South Africa’s indigenous biological systems and nanotechnology to enhance the pre-existing pharmacological activity of the plant species.

Her thesis: Plant-Mediated Synthesis and Characterisation of Silver Nanoparticles using Mimusops Species and their Biological Activity, was supervised by Professor Roshila Moodley and Dr Mzamo Shozi.

Naidoo has explored - at postgraduate level - South Africa’s biodiversity and contributed to indigenous knowledge systems by researching indigenous plant species for their medical and environmental properties.

For her honours degree, Naidoo analysed Moringa oleifera which she sampled at different sites in KwaZulu-Natal, testing its safety for human consumption. She investigated the elemental content in the plant species and in the soil.

She explained that her chosen area of research was inspired by plants often used as nutraceuticals (nutritional and medicinal value) in many communities in South Africa. ‘For example, the Moringa oleifera species is used by the Indian community to treat hypertension and diabetes. I used to see my mother buying the plant in the form of a powder from the local spice shop. She would take it religiously every morning to manage her diabetes,’ said Naidoo. ‘This inspired me to study the plant, to understand how plants function in treating common diseases and determine if they were safe for human consumption.

‘Thereafter, I decided to enhance the activity of the plant by using nanotechnology which is a field of research that is pioneering many scientific projects globally due to its versatility and effectiveness at the nanoscale.’

Naidoo was able to increase the antidiabetic properties of the plant almost two-fold. ‘Because South Africa has a large population that does not receive proper healthcare due to the lack of physical and economic accessibility, my research has the potential to provide drug leads that are safe, cheap and contain a high efficacy,’ she said.

Naidoo grew up in Chatsworth and attended Risecliff Secondary School. After matric, she initially planned to pursue a degree in Pharmacy but fate had other plans and she accepted a place in UKZN’s Applied Chemistry programme. By the end of her first year of study, she had notched up a Dean’s Commendation and a distinction for her Chemistry module - achievements which fuelled her love for chemistry and science.

In her second year of study, Naidoo was awarded a Golden Key International Honours Society accolade and obtained several Certificates of Merit during studies for her undergraduate degree.

‘I was truly honoured to have excellent supervisors in Professor Roshila Moodley and Dr Mzamo Shozi, who guided me throughout my master’s research,’ she said.

Naidoo plans to complete her PhD for which she is currently registered and thereafter implement her research expertise and skillset in an industrial setting.

‘Cheryl’s research prowess combined with her passion for scientific discovery and the need to find solutions to current healthcare issues are moulding her into a formidable young researcher,’ said Moodley. ‘I am immensely proud of her achievement, and I believe that she will continue down this path due to her unwavering self-confidence, determination and desire to succeed.’