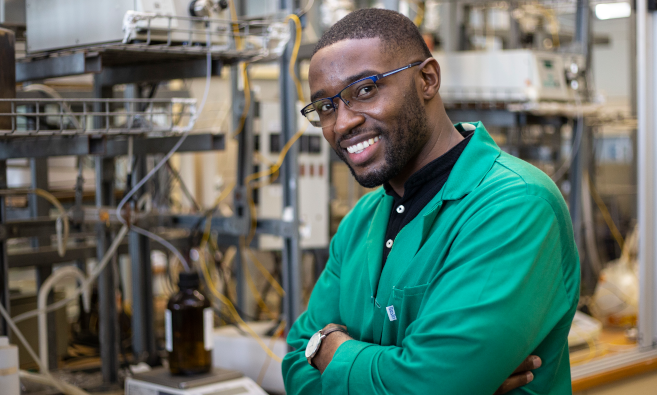 Dr Siyabonga Ndlela who graduated with his PhD in Chemistry.

Hard Times Turn into Good Times Through Study at UKZN

PhD Chemistry graduate Siyabonga Ndlela helped his grandmother sell fruit and snacks to commuters at a taxi rank in Newcastle from the time he was in Grade 3 until matric.

While it was tough, it taught him about responsibility as well as the value of money and hard work.

‘I used to look at the walls at our home and say one day I will change these,’ said Ndlela.

A product of Thubelihle High School in Osizweni, his desire was to study further at a higher educational institution. As the second youngest in his extended family of 19, Ndlela had seen older siblings complete matric and go out and work without any resultant improvement in the financial situation at home.

He knew he had to do things differently and set his sights on going to university.

After completing matric, he applied for financial assistance from UKZN and enrolled for a degree in Applied Chemistry.

‘I arrived at UKZN with nothing, just my bag and blankets after having received an offer from the University.’

Ndlela said staff were friendly, especially, Ms Pinky Mathonsi, who took him under her wing and ensured he settled in and also helped him to get funding and a place in a residence.

He worked as a Supplementary Instruction tutor in his final year of undergraduate studies. ‘It gave me great joy to be able to send money back home,’ he said.

After his honours year, Ndlela was offered an internship at the Technology Innovation Agency (TIA) but did not pursue it as he realised his passion lay in academia.

During his masters’ and PhD studies, he managed to secure funding from the Centre of Excellence in Catalysis Research which enabled him to assist his family and provide for himself.

Ndlela’s doctoral research work involved converting octane - an inexpensive, abundant material - into a higher end product: alkenes, using zeolite as a catalyst via oxidative dehydrogenation of the alkane with as little byproduct and cracking as possible. Cracking is a process in which large hydrocarbon molecules are broken down into smaller ones.

This research was supported by SASOL, which has plants that produce alkanes that end up as waste. The aim was to convert these into valuable products such as alkenes and aromatics, which are important in the detergent industry and in gasoline production and also serve as starting materials in the plastic manufacturing industry.

His work was successful and stable catalysts that did not crack and produced a low by-product were achieved.

His research led to the manufacture of the first zeolite-based catalysts that are active and stable in oxidative dehydration of medium chain alkanes, which is regarded as a significant contribution to the field of study.

Ndlela, who was supervised by Professor Holger Friedrich, published four high impact papers; attended CATSA conferences in Cape Town (2014 and 2019) and Limpopo (2018); and participated in UKZN’s Postgraduate Research and Innovation Symposium during his masters and PhD studies.

As part of his desire to “give back” to the community, he worked as a Residence Life Officer at the Department of Student Housing at UKZN, where he was actively involved in developing students living in residence through planning and facilitating life-empowering programmes.

His aunt, Ms Gcina Ngwenya, described Ndlela as polite and respectful. ‘Siya is very helpful to his family. I would like to wish him good luck and a good life,’ she said.

Ndlela is currently working as a Chemistry lecturer at the Durban University of Technology and is supervising a masters student.