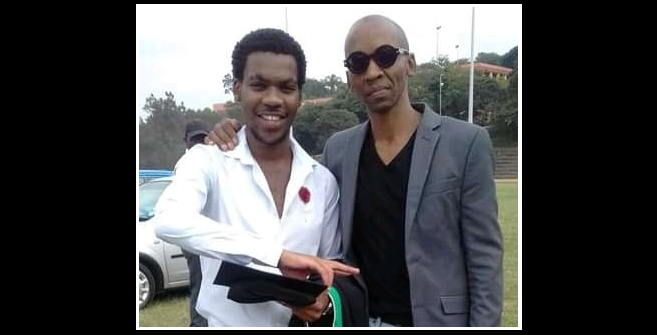 Mr Sanele Shange (left) at his honours graduation with his brother, Goodman.

From Science Foundation to Master’s Degree!

Mr Sanele Shange grew up in iXopo (Springvale) in the KwaZulu-Natal Midlands where his teachers saw great potential in him so they urged his parents to move him to a well-equipped school in an urban area.

In Grade 9, Shange was moved to Zwelibanzi High School in Umlazi where he excelled and matriculated, going on to join UKZN’s Science Foundation Programme which assists students from underprivileged backgrounds cope with university.

Shange then accepted an offer to study for an Applied Chemistry degree which he successfully completed. He continued on to do an honours degree and has now graduated with a master’s degree.

Shange initially wanted to be a pharmacist but decided on Chemistry in line with his desire to work in the area of synthesis, including organic synthesis, pharmaceutical and peptides.

It was during his honours year that Shange decided he wanted to pursue a Master’s degree in Organic Synthesis Chemistry.

Shange’s research work examined resistance to antibiotics in the human body. ‘The idea was to make novel drugs with better performance after overall testing procedures. This goal was achieved. Ten new drugs were made and some had a better activity.’

Shange’s work has had an impact on medicinal chemistry, broadening the research field horizon with the rise of the number of projects within the study, thus improving the efficiency of the drugs through the construction of patents on drug discovery and development.

He thanked UKZN for helping him achieve his degree, especially his supervisors, research colleagues and friends. He is also grateful for his family’s support, encouragement, love and their faith in him.

‘I am very happy about Sanele’s accomplishment,’ said his mother. ‘He is the first in our family to get a master’s degree. He persevered and studied hard!’

Shange plans to do his PhD.