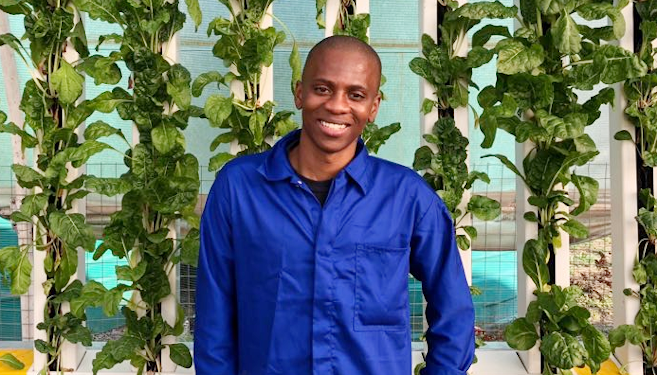 Discovering how to use nutrients processed from human excreta effectively for the hydroponic production of vegetables as part of a strategy towards alleviating poverty in informal settlements was the focus of research by Mr Sisekelo Sihlongonyane.

The investigation earned Sihlongonyane a master’s degree and he now plans to study for a PhD.

Sihlongonyane began his higher education at the Metropolitan International College before moving to UKZN where he completed an honours degree and then decided to take a gap year.

After that he registered for a Master of Science in Agriculture degree, specialising in Crop Science with his goal being to learn more about urban agriculture (hydroponics) in the production of vegetables.

In his dissertation, supervised by Professor Lembe Magwaza, Professor Alfred Odindo, Professor Chris Buckley and Professor Daniel Yeh, Sihlongonyane evaluated the use of human-excreta-derived materials for the hydroponic production of Swiss chard and non-heading Chinese cabbage in a vertical hydroponic system.

His project involved close collaboration with UKZN’s School of Agricultural, Earth and Environmental Sciences; the Water Sanitation and Hygiene Research and Development Centre (UKZN WASH R&D); the University of South Florida in the United States; and eThekwini Municipality.

Sihlongonyane focused on finding out how nutrients processed from human excreta can be effectively used for the hydroponic production of vegetables as part of a strategy towards alleviating poverty in informal settlements. Nutrients were processed by a sanitation technology known as NEWgenerator, which was connected to a community ablution block in an informal settlement in Durban.

His findings provide information on how the roll-out of sanitation technologies with the ability to recover liquid fertilisers can be used to address global food poverty through sustainable innovations. And they reached an unexpected audience when the University of South Florida forwarded the research results to NASA as a suggestion for how astronauts could produce their own food while in space using NEWgenerator and its vertical hydroponic system.

Sihlongonyane shared what motivated him: ‘I wanted to be part of a team whose goal was to help alleviate the global sanitation crisis by providing improved sanitation services while addressing food poverty through innovative sanitation and agricultural technologies.’

He said the road to his master’s degree had not been easy. ‘But there were a lot of things I learned through working with international research partners in successfully carrying out a project,’ he said. ‘The greatest lessons were always to stay humble, be ready to listen and don’t be afraid to commit mistakes while learning.’