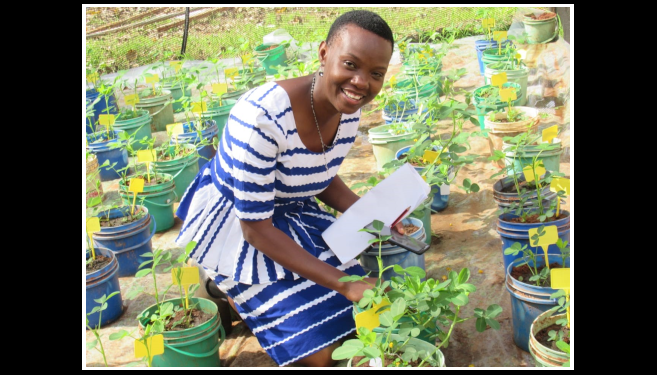 PhD Focuses on Breeding Groundnut for Rust Resistance in Tanzania

Groundnut is a vital crop for commercial and smallholder farmers in Africa because of its high edible oil and protein content, but it is vulnerable to pests and diseases. One of the worst culprits is rust caused by pathogenic fungi of the order Pucciniales.

African Centre for Crop Improvement (ACCI) graduate, Dr Happy Daudi focused her PhD research on breeding groundnut for resistance to this disease in Tanzania. Her interest was sparked by prior experience of rust’s impact while working for the Tanzania Agricultural Research Institute (TARI), where she has been employed since 2010.

Daudi, who completed her first degree and an MSc at Sokoine University of Agriculture in Tanzania, said her love of science, especially genetics and biology, plus the influence of working with an inspiring plant breeder at TARI, led her to join the ACCI’s PhD plant breeding programme in 2017.

‘I had an idea of the crop and its challenges. Then the topic (rust) was confirmed, with a survey conducted with 170 groundnut farmers, as the first for my study,’ she said. Daudi’s research found that 30% of the farmers reported that groundnut rust was a major cause of yield reduction. The survey also found that high yield was the agronomic attribute most prized by the farmers, so this trait was included in Daudi’s design.

Daudi’s next step was to determine the extent of genetic variation among diverse groundnut collections using phenotypic traits and simple sequence repeat (SSR) markers, to select distinct and complementary genotypes for breeding.

This was followed by assessing the genotype-by-environment interaction (GEI) effect on kernel yield and selecting the best adapted groundnut genotypes in target production environments in Tanzania.

Finally, she set out to determine the combining ability effects and gene action controlling rust resistance and agronomic traits in groundnut genotypes for further breeding.

There were obstacles along the way. ‘The main challenge was climate change. I experienced flooding at one site in 2019,’ said Daudi. ‘The second challenge was the multiplication ratio of the crop itself; in order to fit in with my schedule, it needed a combination of rain and irrigation to multiply and produce enough seed for evaluation.’

The result of Daudi’s research was the development of new breeding families with high combining ability effects for rust resistance and kernel yield. She has also published three scientific papers from the study.

Daudi’s research was funded by the International Crops Research Institute for the Semi-Arid Tropics/India through Tropical Legumes III project. She is currently working as a plant breeder for groundnut and sesame at TARI and supervising two groundnut projects (AVISA & TRICOT) in collaboration with ICRISAT and Bioversity International.