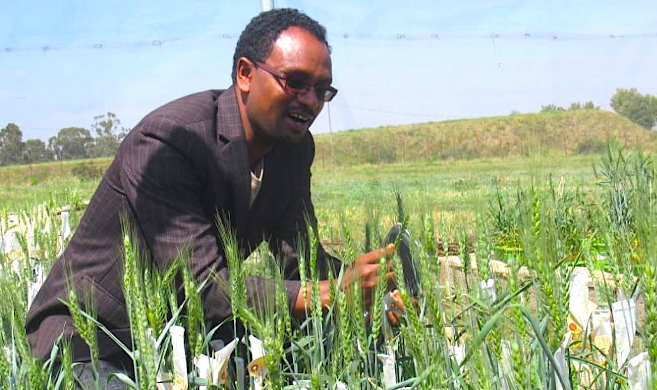 Dr Yared Belete who has a keen interest in improving crop cultivars.

Climate change is a growing challenge for farmers, especially in Africa where temperatures are expected to increase more than in other regions of the world. Breeding crops that are adapted to drought-prone environments therefore makes sense as a sustainable strategy.

For his PhD study, Dr Yared Semahegn Belete chose to work on developing drought tolerance in bread wheat for Ethiopia.

Belete comes from a farming background in Ethiopia and has a keen interest in improving crop cultivars. ‘As an agricultural professional, I believe that any activities that are tailored to the needs of farmers have the potential to improve their livelihood,’ he said.

He obtained his first degree in Dryland Crop Science at Mekelle University, and a second degree in Plant Breeding at Jimma University, both in Ethiopia, before joining the African Centre for Crop Improvement (ACCI) PhD programme at UKZN in 2017. His studies were sponsored by the Alliance for a Green Revolution in Africa.

Belete started with conducting a survey on bread wheat farmers’ needs, challenges and preference to inform his breeding work, an exercise he found enlightening.

‘Assessing farmers’ practices, production constraints and their preferences was an interesting part of my research, which should be followed as an essential approach for any intervention in the improvement of the livelihood of farmers, including breeding improved crop varieties for farmers. Varietal traits preferences of the farmers were amazing, and should be aligned with each breeding step, including genomic selection, in order to enhance the genetic gain,’ he said.

Bread wheat genotypes were screened for drought-tolerance using phenotypic analysis to select promising lines for use in breeding for drought-tolerance. The genetic parameters and association of yield and yield components were estimated to determine selection criteria for increasing genetic gains under drought-stress conditions.

‘I also assessed the genetic diversity and relationships among the selected wheat genotypes using SSR molecular markers in order to complement the phenotypic data in identifying complementary parents for further breeding for drought-tolerance,’ he said.

The final step was to determine combining ability effects of the selected wheat genotypes, thereby deducing gene action controlling traits of interest and identifying promising families for drought-stress conditions. These families will then be advanced through the single-seed descent selection method.

Four scientific papers based on results of this study have been published in high impact journals.

Belete is currently working as a plant breeder in the Crop Research directorate at the Ethiopian Institute of Agricultural Research.