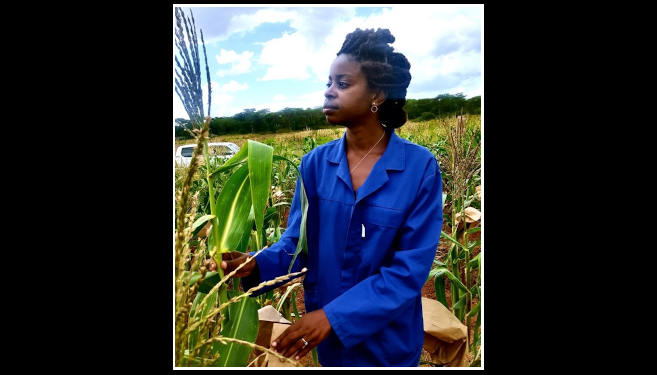 ‘There is hope for Africa,’ said newly capped Dr Chapwa Kasoma about her ground-breaking work on breeding maize resistant to the dreaded fall armyworm.

Kasoma conducted her PhD plant breeding research through UKZN’s African Centre for Crop Improvement (ACCI) and her findings have come at an opportune time.

The fall armyworm (FAW), first spotted in Africa in 2016, is a global scourge, infecting 350 host-plant species, including maize and other staple crops, and causing annual losses of between US$2,5 billion and US$6,2 billion in the main maize-producing countries of sub-Saharan Africa.

‘She has developed experimental FAW resistant maize hybrids using landrace varieties and donor parents sourced from CIMMYT (The International Maize and Wheat Improvement Center),’ said Shimelis. ‘She has also successfully developed and optimised the techniques for artificially rearing the FAW and controlled inoculation leading to reliable infestation, which has allowed effective evaluation and selection for FAW resistance under controlled environmental conditions.’

Kasoma’s novel approach has caught the attention of the global plant breeding community. A recent article by her and her team in the Journal of Crop Improvement drew reaction from the research community, and she received a Best Research award from ScienceFather for the value of her contribution to combatting this pest.

Kasoma’s interest in the improvement of plants was sparked while working in her mother’s garden - an educator with a farming background who grew maize and vegetables at their home in Lusaka, Zambia. Kasoma started her doctoral studies at the ACCI in 2017, after completing a Bachelor’s degree in Molecular Biology and Genetics and a Masters in Plant Breeding and Seed Systems at the University of Zambia.

Explaining why she chose to focus on FAW, Kasoma said before starting her PhD, she had worked for several seed companies in Zambia, where she was exposed to the maize industry and its challenges, including the FAW.

‘I experienced first-hand its devastating effects on our staple crop,’ she said. ‘I was then working as a field research associate in R&D and knew something needed to be done about it.’

Her research comprised four steps. First was a series of interviews with maize farmers in some of the districts in central Zambia most affected by FAW, to understand their farming practices, challenges, and preferred maize traits.

In the second step, a large selection of candidate maize genotypes was collected according to the farmers’ specifications, planted and screened under natural populations of FAW to assess their reaction to it. A promising sub-set of this selection was then assessed under controlled conditions for validation purposes.

‘This required the use of a screen house and rearing of the FAW insect to provide populations for artificial infestation of screen house maize plants,’ said Kasoma.

In the third step, promising genotypes were crossed to generate experimental hybrids and these were evaluated in three different locations representing two agroecological regions of Zambia.

The final step, which will be a continuation of her PhD, will consist of advanced field evaluations to identify superior hybrids and open pollinated varieties for variety registration and release through the Zambia Agricultural Research institute (ZARI).

The recent appearance of the FAW in Africa created several challenges for Kasoma. ‘Firstly, zero prior experience with this pest in Africa meant that little or no information about its behaviour and biology under African conditions was available when we embarked on this work,’ she explained.

‘Many of the steps of the research required more effort to develop and optimise the protocols that were used in the data collection process. For instance, in assessing the reaction of the candidate maize collections in Step 2 (screening), I was required to develop a new protocol for damage rating, taking into account the pest’s behaviour under SSA conditions.

‘This meant that I first had to conduct a purely observational experiment to help me with information such as how long the pest takes to reach sufficient infestation levels before accurate damage ratings on maize could be done. Also, information such as how often to rate the maize plants and how many times to rate them in a single experiment required prior data such as the speed of feeding of the insect, and this was only obtainable through the observational study,’ said Kasoma.

The second challenge was that some of the activities involved in the various steps of the research required specialised facilities which were not readily available in Zambia owing to the novelty of the research subject.

‘For instance, optimised screening and insect rearing facilities had to be carefully planned for and a lot of collaboration and improvising went into helping us achieve these objectives,’ said Kasoma.

A third challenge - that she did not foresee, but which turned out to be a great learning experience - was the scrutiny from experts who research findings on a topical issue such as FAW attracted.

‘The rigorous criticism I received from the peer review process involved in the dissemination of my findings built my competence beyond what I initially expected,’ said Kasoma.

‘I was blessed with a brilliant PhD supervisory team at the ACCI that provided me with very sound guidance on the research. Prof Shimelis and Prof (Mark) Laing have not only been my supervisors, but great mentors in my doctoral journey. I have gained more experience in scientific writing and data analysis; skills that have enabled me to advance my work and offer support to other researchers in turn.’

Kasoma said her research had produced some interesting findings.

‘The remarkable variation in the reaction to FAW attack that I observed in the maize genotypes I evaluated is indicative of the inert partial resistance that can be harnessed through breeding to develop cultivars with commercially acceptable levels of fall resistance,’ she said.

‘Local maize in hybrid combination with improved maize genotypes generates promising experimental hybrids that combine well with farmers’ preferred traits and exploitable FAW resistance. There is hope for Africa to develop locally-adapted FAW-resistant maize, as has happened in the Americas, where the FAW originated and where resistant varieties exist.’

She says while additional efforts are required to build on the current research, it lays the foundation for FAW resistance breeding in Africa, and technologies such as next generation sequencing (NGS) which can expedite the process of developing the desired cultivars.

Another source of reward was the insect rearing process. Kasoma said this had presented interesting observations about the FAW’s biology and how knowledge of the insect’s behaviour can be used in plant breeding to develop variants of crop species with less attractive attributes to the pest.

‘I was surprised to find that the fall armyworm is actually a relatively easy insect to rear for study purposes,’ she said.

Kasoma’s research was funded by the Alliance for a Green Revolution in Africa (AGRA) and supported by ZARI. Moving forward, she hopes to apply her knowledge, skills and experience in the research and development sector of a leading agricultural institution in order to tackle some of the problems farmers face and help alleviate food and nutritional insecurity in sub-Saharan Africa.