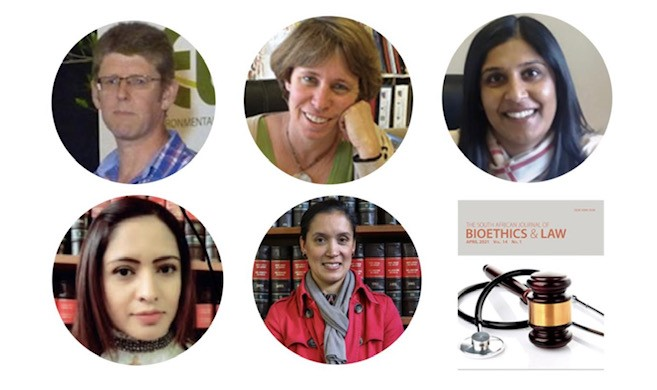 Articles by several academics in the Law School on the Pietermaritzburg campus have featured prominently in the latest issue of the SA Journal of Bioethics and Law (SAJBL).

The School of Law is proud to have a selection of its research expertise showcased in the journal, which highlights research on contemporary topics in bioethics, healthcare and law.

The articles are: (1) “Critiquing the Ethics Review Process in the 2019 Nieuwoudt et al Study on the impact of Age and Education on Cognitive Functioning Among Coloured South African Women” by Strode and Freedman; (2) “A Critical review of the South African Legal Framework on Adolescent Access to HIV Prevention Interventions” by Toohey and Strode; (3) “Forms to Capture Child Consent to Surgical Procedures: Time to Focus on Function Rather than Form” by Strode and Badul; and (4) “The Brave New World: Should We Tread Down the Path to Human Germline Editing?” by Soni.

The first article was a collaborative work with Dr Zaynab Essack and Ms Heidi van Rooyen of the Human Sciences Research Council in response to the outcry on social media about the publication of an article about research into age-related cognitive decline in Coloured women in the Western Cape. The article was contextualised within the lived reality of contemporary race relations in South Africa.

The article by Toohey and Strode examines whether the SA legal framework is a facilitator or barrier to adolescent access to key HIV prevention services such as HIV testing and HIV education. The findings indicate a clear recognition of evolving capacity and the inclusion of protections aimed at enhancing decision-making.

The third publication aims to provide guidance to surgeons and other medical practitioners performing surgery on children by setting out the legal norms relating to child consent to an operation.

Following the announcement in 2018 that Chinese scientist He Jiankui had proceeded to gene-edit human embryos, a moratorium on germline editing was quickly proposed. Soni’s article aims to provide a primer in the existing national and international legal framework for gene editing as well as a description of the prominent current views of heritable germline editing. The article is important in contributing a South African perspective to the debate and conversation in this field.

‘We were unaware that our articles would be featured in the same issue, but are proud that some of the research at the School is being recognised and showcased in such a widely read academic journal,’ added Soni.

Dean and Head of the School of Law, Professor Managay Reddi, expressed her delight and pride in this remarkable achievement by the group of colleagues based in Pietermaritzburg.

‘The specialist field of bioethics and medical law is one of the School’s niche areas of research. The colleagues from Pietermaritzburg have always batted above their weight. They have done so yet again by driving the School’s research agenda in bioethics and medical law through the dissemination of their research in this highly regarded journal. Our School could not be more pleased. We wish them many such successes in the future,’ said Reddi.