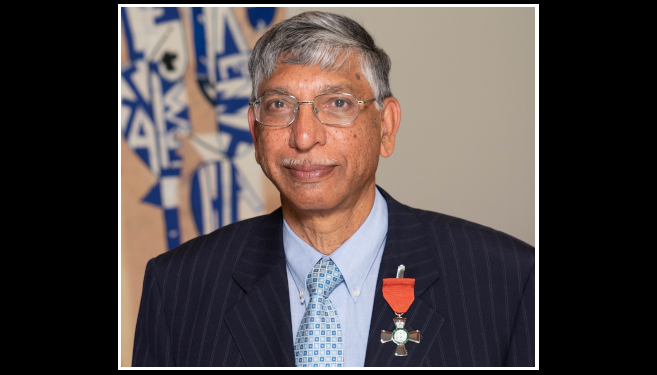 UKZN alumnus, Dr Joe Singh has received the highest honour in New Zealand for his services to health.

A UKZN alumnus, who graduated from the Medical School in 1978 and immigrated to New Zealand in 1982, has been awarded that country’s Order of Merit for services to health.

He is Dr Gagrath Pradeep Singh, fondly known as Joe, who is now a specialist geriatrician at North Shore Hospital in Auckland.

The New Zealand honours system was established by royal warrant on 30 May, 1996 by the United Kingdom’s Queen Elizabeth II ‘for those persons who in any field of endeavour, have rendered meritorious service to the Crown and nation or who have become distinguished by their eminence, talents, contributions or other merits, and to recognise outstanding service to the Crown and people of New Zealand in a civil or military capacity.’

According to the Prime Minister and Cabinet of New Zealand, Singh co-established and led Shore Trials and the Research Unit (STAR Unit) since 1996. Under his voluntary leadership, more than 60 clinical trials took place, allowing local patients in the Waitemata District Health Board area access to new medications and best practices care that would have otherwise not have been possible through the health system.

Singh’s son, Sudvir, who is a Nordic-based medical doctor, proudly announced the news on his Twitter account: ‘Lovely news today to hear that my dad, Pradeep (aka Joe) Singh of @WaitemataDHB, is being awarded the Member of NZ Order of Merit as part of the New Year Honours List! We are very proud of him.’

Born in Clairwood, Durban, Singh has fond memories of his time at the Medical School. ‘I studied at the University of Natal Medical School in Umbilo where I met my beautiful wife and lifetime companion, Dr Bharati Narothum,’ he said. ‘It was a very interesting time - Black Consciousness and the late Steve Biko were a few years ahead of us. Our clinical years were at the famous King Edward VIII Hospital which at that time was one of the largest in the southern hemisphere. Our years at the Medical School were wonderful and we remain friends with many of our classmates.’

Singh, who began his specialist training in geriatrics at a time when the field was still in its embryonic stages, has served as an examiner for the Royal College of Physicians since 1995 and for the Australian Exams since 2005. He enjoys research and has completed about 60 local and international trials.

For the past 20 years, he has served as chairman of the Senior Doctors Committee at the North Shore Hospital facilitating communication with management.

Singh is a keen cricketer and captains the senior doctors’ team.