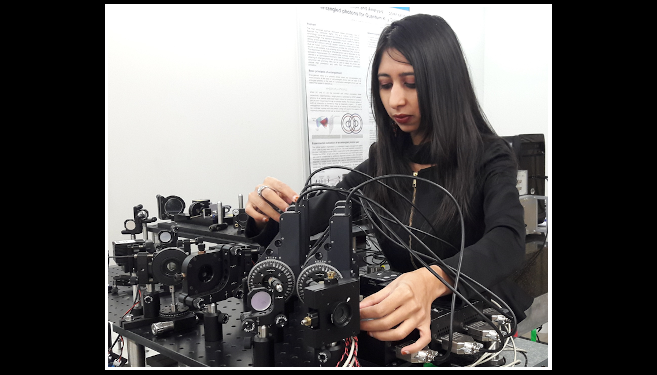 Dr Yaseera Ismail, a senior lecturer in the School of Chemistry and Physics (SCP) and a member of the Centre for Quantum Technology, has been selected for the second cohort of the Department of Higher Education and Training’s (DHET) Future Professors Programme (FPP), an initiative aimed at accelerating the development of senior researchers at universities to help them become full professors.

The national FFP is building capacity in South Africa's academic institutions by preparing early career academics, across disciplines, to advance to professorship, focusing on transformation through targeting women and Black scholars. It uses the National Research Foundation’s rating system to identify promising candidates who then participate in a series of highly structured seminars in South Africa before being placed in laboratories or seminar sessions abroad. Due to the COVID-19 pandemic, the 2021 cohort will engage in virtual seminars with further in-person and international engagements to hopefully take place next year.

Ismail specialises in the development of quantum technologies, particularly in quantum information science where she is experimenting with quantum optical tools to advance free-space long-range secure quantum communication. By applying the laws of physics, quantum communication ensures the security of information by transferring information from point to point, implemented by employing quantum carriers to form the key used to secure sensitive information.

Ismail works in the realm of quantum communication by applying Quantum Key Distribution (QKD) - an advanced quantum process which involves transmitting a secret key between two individuals to secure data transfer for more prolonged periods by taking advantage of nature’s laws to guarantee the secrecy of the generated key. Ismail is currently involved in a BRICS multilateral collaboration to develop a Quantum Satellite and Fibre Communication (QuSAF) network in South Africa to establish a quantum network with a joint intercontinental satellite-based quantum key distribution link utilising the Micius satellite. QuSaF will drive the development towards a quantum internet in South Africa by deploying quantum communication technology in the first real-world Quantum Satellite demonstration in the country, comprising a secure quantum link over satellite and a long-range fibre network.

During her career, Ismail has received a TechWomen Emerging Leader Award from the USA's Department of State, and in 2018 was selected as an Ambassador of the Optical Society of America (OSA). She previously served as the founding president of an OSA student chapter at UKZN and is on the executive committee of the OSA Non-Linear Optics technical group, as an advisor to the UKZN OSA Student Chapter, and an OSA travelling lecturer. She is also a member of the Editorial Board of the Scientific Reports journal.

‘Ismail’s selection confirms that our College deserves credit for its performance and putting UKZN on the map for the right reasons,’ said the Deputy Vice-Chancellor of the College of Agriculture, Engineering and Science, Professor Albert Modi.