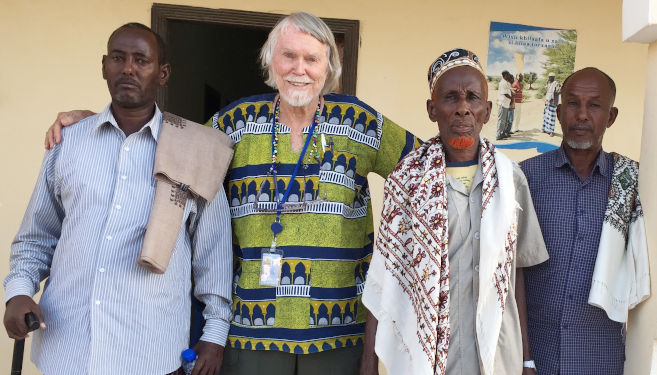 Professor David McQuoid-Mason of UKZN’s Centre for Socio-Legal Studies has been in Somalia assisting the local Ministry of Justice and Judiciary resolve differences in opinions about the country’s Legal Aid Act - which he drafted - as well as clarifying the role of paralegals there.

Soon after his return to South Africa, McQuoid-Mason travelled to Australia to conduct workshops for lawyers and NGOs on interactive teaching methods used when providing legal education to communities.

During his stay in Somalia, McQuoid-Mason completed a four-day UN Safety Security Training Course In Mogadishu and then conducted scoping meetings on legal aid and the role of paralegals with the United Nations Development Programme (UNDP), the Somali Women’s Development Centre, the Federal State Ministry of Justice, the Federal State Chief Justice; the Somali Bar Association, judges, a prosecutor, a paralegal employed by the Ministry of Justice, a police officer and a prison officer.

He then travelled to Gorawe in Puntland, (where the ancient Egyptian pharaohs used to obtain their frankincense from the forests), to conduct meetings on legal aid and the role of paralegals with the Puntland Legal Aid Centre, the Minister of Justice, the Chief Justice, a judge of the lower court, a prosecutor, a police officer, a prison officer, traditional elders and religious leaders, the Puntland Bar Association, the Puntland Women Lawyers Association, the Dean of the Law School of Puntland State University (PSU), lawyers and paralegals employed at the PSU Legal Aid Clinic, and the Puntland Human Rights Defender.

McQuoid-Mason then flew (on a noisy, aviation fuel fume-leaking, 30-year-old helicopter) to Baidoa, to conduct meetings on legal aid and the role of paralegals with a judge of the lower court and traditional elders and women leaders involved in alternate dispute resolution.

As Somalia is a conflict zone, he had armed protection wherever he went outside the perimeters of airports and ‘safe zones’. Two weeks after his return to South Africa he left for Australia, which was a comfort zone in comparison to Somalia.

Said McQuoid-Mason: ‘I was able to draw on my teaching experience in access to justice education in both South Africa and many of the African and Australasian countries that have similar English Common Law principles to Australia, to explain how these conflicts have been resolved. I also demonstrated how the South African Constitution and judiciary have dealt with such conflicts. This was particularly relevant to New South Wales and Victoria - the only two Australian states which have a Bill of Rights.’