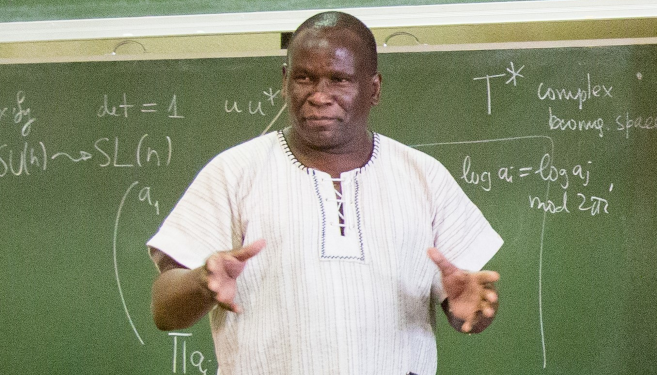 Academic Leader of Mathematics on the UKZN Pietermaritzburg campus, Professor Precious Sibanda, has been appointed President of the South African Mathematical Society (SAMS) for a two-year term.

Known for his research in the field of applied mathematics and mathematical modelling of fluids, Sibanda has been an academic at UKZN for 17 years.

Sibanda worked at the University of Zimbabwe for several years before joining UKZN.

Sibanda explored the flow of fluids in boundary levels, which he describes as flows near solid surfaces and the interface between solids and fluids, and heat transfer between different surfaces and fluids, which has application in heat exchangers.

Sibanda has also worked on the combination of numerical methods and fluid dynamics, the former providing the tools to solve the differential equations derived from fluid dynamics.

He initiated the creation of an annual workshop on numerical methods for differential equations in Pietermaritzburg, which for the past 12 years has been attended by PhD students and young academics from various institutions across South Africa and neighbouring countries.

The 13th edition of this workshop is scheduled to take place at the end of June 2020.

Another major contribution Sibanda has made to his Discipline in the School of Mathematics, Statistics and Computer Science (SMSCS) is his mentorship of up-and-coming academics - he currently mentors five young Mathematics staff members on the Pietermaritzburg campus.

‘I hope to help develop independent, hard-working people who excel in both the research and administrative responsibilities of academic life,’ said Sibanda.

Sibanda has worked hard to ensure the successful establishment of pure mathematics as a specialisation on the Pietermaritzburg campus, with a majority of Mathematics Honours students in 2020 specialising in Pure Mathematics.

As President of SAMS, Sibanda aims to present South African Mathematics in the best light possible, and works to ensure the overall wellbeing of the Society, representing it at various levels. He has been involved in the society in several roles since 2008, including as vice-president and treasurer. Together with their stakeholders, the Society is actively involved in several initiatives such as the National Graduate Academy for Mathematical and Statistical Sciences to contribute to the pipeline of mathematicians in the country.

Sibanda, who has also been recognised as a Distinguished Teacher within the College of Agriculture, Engineering and Science, has graduated more than a dozen PhD students and many more MSc students in a career spanning more than two decades, including two UKZN staff members. He is among the University’s Top 30 Published Researchers, and is a member of the Academy of Science of South Africa.

‘We appreciate what Professor Sibanda has done for his Discipline, especially how he has been able to motivate and mentor young mathematicians,’ said Dean and Head of the SMSCS, Professor Delia North. ‘He is a fantastic leader and role model as an academic.’