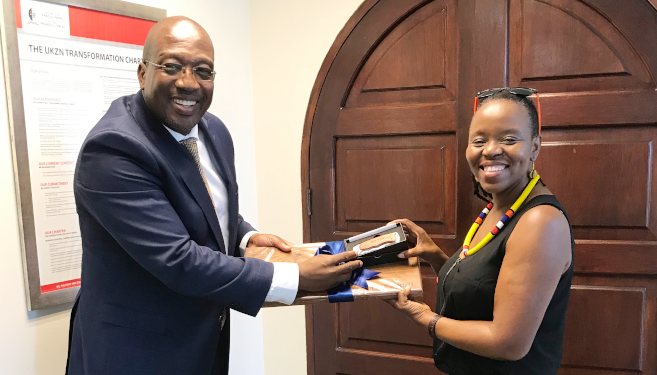 A group of friends, patriots and alumni of UKZN have formed a not-for-profit company, UNP Alumni for Dignity NPC to pool resources and skills to make a positive contribution towards addressing the challenges confronting South Africa.

UNP is the fond nickname of the Pietermaritzburg campus when these alumni attended the University in the late ’80s and early ’90s.

Speaking on behalf of the group, which is presently comprised of 200 alumni, Ms Mpume Nyandu, who is responsible for marketing, communications and stakeholder relations for UNP Alumni for Dignity NPC, said that studying at UKZN during the ‘dying days of apartheid and the birth of democracy … moulded us as young people and greatly influenced who we were to become as adults.’

Launched in early March, Nyandu said that the company’s mission is to ‘contribute meaningfully to the sustainable development of UKZN, its underprivileged students and the feeder communities surrounding it.’

She added that they have engaged with stakeholders, including Vice-Chancellor and Principal Professor Nana Poku and Minister Blade Nzimande, to understand the challenges and opportunities at the University. ‘Our aim is to achieve maximum impact for every Rand spent. Over the next few weeks we will announce our programme of action to all stakeholders.’

Funds to the tune of R100 000 were raised at the launch and the group is confident it will raise sufficient funds to implement a high-impact programme of action. Speaking on behalf of University Management, Acting Executive Director of Corporate Relations, Ms Normah Zondo commended the group for their efforts. ‘As the University’s largest stakeholder group, we believe that efforts by alumni can go a long way in assisting current students and the broader community. We are grateful for the work you are doing and look forward to more initiatives like this and we also call upon all our alumni to continue with such meaningful engagements.’

An accomplished mountain-climber, Nyandu believes trekking up mountains, including Mount Kilimanjaro, stands her in good stead to raise awareness and funds for various causes. She plans to climb Kilimanjaro and Mount Elbrus, the highest mountain in Europe, to raise funds for schools later this year. ‘Plans are underway for a programme of mountain climbs to fundraise for the UNP Alumni for Dignity NPC and I hope to take some alumni on some of these,’ she said.