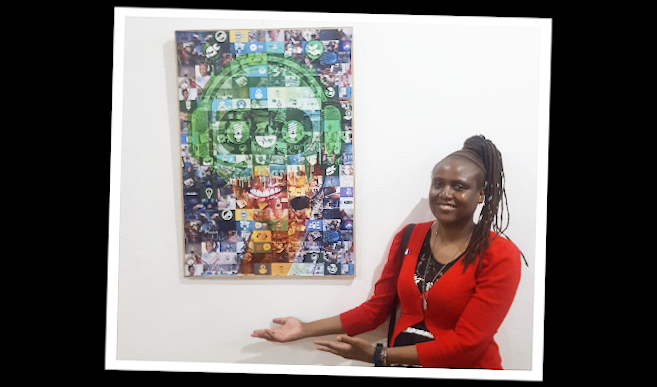 Digital Arts PhD student at UKZN, Ms Claire Dongo is among 30 artists shortlisted for a United Nations (UN) funded exhibition in the mixed media category. Her research focuses on the fragmented image in 20th and 21st century art practice.

Her submitted artwork is titled The Many Faces of Green Labor.

Through its Green Enterprize Programme, the International Labor Organization (ILO) issued a call for Zimbabwean artists to submit work that expresses the changing world of work in a greener economy, as well as the challenges of a just and inclusive transition from their personal perspective.

Given that the subject matter is wide and complex, Dongo decided to utilise a case study to represent her perspective. ‘Chatbots are part of the green movement and many organisations are adopting them as their audience support agents. My initial perspective from a distance was that the chatbot is replacing the human counterpart and creating unemployment,’ she explained.

Viewed from a distance, Dongo’s artwork highlights this phenomenon, with the chatbot illustration almost covering the human support agent with harsh dripping paint. This represents her initial negative outlook on the subject from a distance but as she dove into the research, her perspective started to change and she realised she had many misconceptions. When one takes a closer look at the artwork, it is made up of smaller fragments of visuals that highlight the positive aspects.

Dongo believes that chatbots are reducing carbon emissions from cars because fewer people travel to work and they contribute to energy saving as human call centres that operate 24/7 use a lot of energy.

‘Chatbots are not creating unemployment, as previously perceived, but are redefining the customer support industry by creating new jobs for designers, developers, animators, Chatbots information analysts and Chatbots information advisors (former support agents) to make them more efficient,’ said Dongo. ‘They improve the working environment by limiting working hours and creating the ability to work from home and improve human well-being. This promotes decent work for all. The photomosaic technique I used adds value to the subject matter as it samples and repurposes found images to tell a different story as a group, which mimics recycling, the most widely known aspect of the green movement.’

The ILO Zimbabwe and Namibia Country Director opened the exhibition at the National Art Gallery in Harare. The opening was well attended by the programme’s partners, which include the UN, the British Council, Culture Fund and Sweden Sverige, among many others. The group exhibition will be on display around the world as part of the ILO’s celebration of its 100th anniversary. It will also be exhibited at the UN headquarters in Geneva.