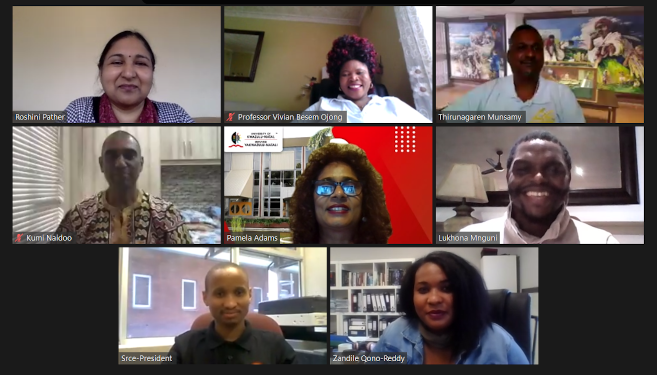 Dr Roshini Pather, UKZN’s Portfolio Head for Special Collections, remembered Dr Naidoo for her ‘outstanding participation in the liberation movement and her immense contribution to South African society.’ Noting Naidoo’s donation of books, letters, legal documents, photographs, recordings and memorabilia to the Gandhi-Luthuli Documentation Centre at UKZN, Pather added how the centre was ‘in the process of digitising her collection as an essential treasure that should be preserved.’

Thanking UKZN for the invitation, Naidoo said he was honoured to be celebrating Aunt Phyls (as she was affectionately known to him) mentor and ‘one of the greatest South Africans who ever lived - Chief Albert Luthuli.’

Recalling the last conversation he had with former friend and activist, Mr Lenny Naidu, and his important message of the struggle for justice not being a sprint but a marathon, Naidoo shared two fundamental lessons he had learned - ‘first, that those who have had the privilege of acquiring knowledge have the burden of pushing against all forms of injustice until they become dislodged; and second, that it’s important to share in the sentiment of being life loving and wanting to live in dignity for your country.’

Recognising how many South Africans still live in appalling conditions, Naidoo raised the question of why his generation had failed to deliver justice to the majority of the people and why these injustices have persisted.

Noting the validity of the slogan “freedom in our lifetime” in the present day, he addressed the unsolved death of the first African Nobel Peace Prize winner, Chief Albert Luthuli, and called for an investigation into his death to be finalised and placed before a judge in a South African court.

Naidoo called for history to be recorded correctly, as he shared his involvement as a Global Ambassador for the Pan-African movement, Africans Rising for Justice, Peace and Dignity in its campaign to rewrite history. ‘I believe that there cannot be any meaningful healing without revealing all the injustices that have occurred. If it is not known where we come from, we will never know where we need to go. If we forget our history, we forget and negate our present.’

He focused on the need for change in four main areas:

Closing off the webinar Naidoo said, ‘all of the great leaders we are honouring today would have been in the frontlines fighting for our survival. The sad reality is that short-term political and economic interests have held back the kind of change and the scale of change we need. We cannot get by now with small incremental baby step changes in the right direction.

‘At this moment, this convergence of crisis calls for a billion acts of courage from ordinary citizens whether in racial justice, environmental justice or inequality justice movements. If we connect up these struggles at a time of unprecedented global mobilisation against the injustice that we are currently witnessing, I believe that the time for big change and transition, which has been long overdue, might be around the corner.’

The facilitator for the event and lecturer in the School of Social Sciences, Mr Lukhona Mnguni, congratulated Naidoo on a ‘powerful lecture that’s a reminder of the true essence of humanity embedded in the many giants that have come before us.’