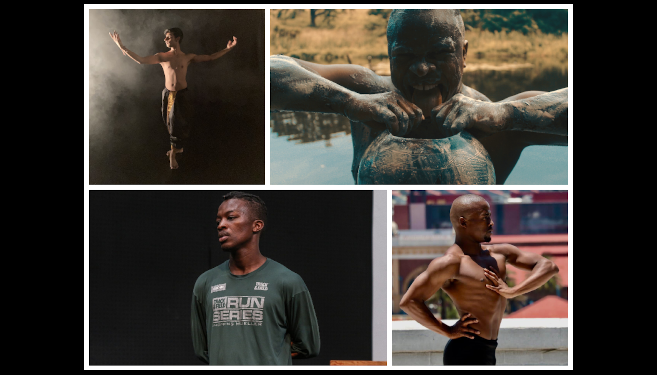 Choreographers who are part of the mentorship project.

Four screen dance works premiered online on 3 December in a project involving the JOMBA! Contemporary Dance Experience and the Centre for Creative Arts.

It is the first 2020 project to be supported by the newly-launched Sustaining Theatre and Dance (STAND) Foundation.

The initiative, known as the STAND Foundation JOMBA! Contemporary Dance Experience’s Choreographic Mentorship Project, combines four young choreographers who have tested their choreographic languages on the JOMBA! platform with four experienced mentors over a 10-week period.

UKZN’s Performing Arts lecturer and Artistic Director of JOMBA! Dr Lliane Loots says she has been ‘overwhelmed by the hard work and dedication of the four selected choreographers and their amazing mentors, as well as by the serious and important screen dance work. We are really pushing a new growing screen dance genre in South African dance and it feels very significant to be helping artists work at this time.’

The four young choreographers are Sabelo Cele, Pavishen Paideya, Kaldi Makutike and Phumlani Mndebele who have been mentored by Alfred Hinkel, Gregory Maqoma, Sbonakaliso Ndaba and Musa Hlatshwayo, all of whom are celebrated choreographers with numerous awards and decades of experience between them.

Cele’s dance film titled Isabelo offers a provocative ceremony that unhinges the relationship of sexuality with traditional African philosophy. Challenging the heteronormative and the legacies of Christianity in Africa, Cele’s film looks set to provoke a lot of discussion.

Paideya returns to his cultural traditions in his work Rupa which is inspired by ancient Indian sculpture and customs around the shape and movement of the body. Paideya has a unique ability to celebrate his diaspora Indian heritage but also to jolt it a little and offer the slightly unexpected.

Makutike’s Thoughts In My Head is a deeply personal journey into the choreographer’s own mind with the work being created through the prompting of the mind’s wondering and the conversations ‘we have in our heads’. It is a beautiful and painful look at mental illness and depression and the power of dance - and dance making - to be transformative.

Chairperson of STAND Gregory Maqoma said: ‘We are really excited by this collaboration with JOMBA! as it reflects STAND’s commitment to engaging in partnerships with serious players in the dance and theatre world, and our shared vision to build and support a new generation of outstanding dance and theatre-makers.’

•    The four dance offerings premiered as a 40-minute free package at 19h00 on December 3 on the JOMBA! YouTube channel and can be viewed individually on the JOMBA! website until December 18.