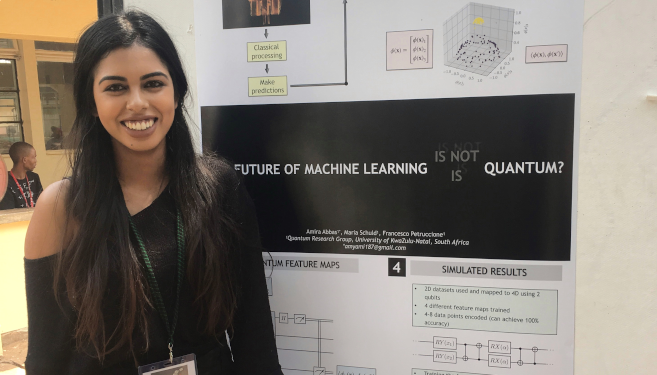 Ms Amira Abbas who received a PhD Fellowship from Google.

Google PhD Fellowship for Quantum Researcher - a First for Africa

A PhD candidate in the Centre for Quantum Technology at UKZN, Ms Amira Abbas, is the first student from a university in Africa to receive a PhD Fellowship from Google in the category of quantum computing.

The Fellowship programme began 12 years ago, and has helped support about 500 postgraduate students in computer science and related fields in North America and Europe, Africa, Australia, East Asia and India.

Abbas, one of two recipients in the quantum computing category, joins 52 other recipients from all over the world including Australia, Canada, China, France, Germany, India, Israel, Japan, Morocco, South Korea, Spain, Switzerland, Taiwan and the United States of America.

Two other students from South African universities are in this year’s cohort – one is from the University of Johannesburg and the other from Stellenbosch University.

The Google Fellowship, which recognises outstanding students who seek to influence the technology sector through their research, will support Abbas as she conducts her research and connect her to a Google Research Mentor.

Abbas qualified as an actuarial scientist and passed all the Chartered Financial Analyst board exams before taking on studies in quantum computing. She has worked in the financial sector and is now applying her knowledge and experience to the intersection of artificial intelligence, machine learning and science.

She recently spent time at IBM’s quantum computing research lab in Zürich, Switzerland, where she explored quantum neural networks and finance applications as part of her PhD research into new financial instruments that could arise from quantum computing.

Abbas thanked the Google Quantum/Artificial Intelligence Team for the award, saying it had made her year brighter!