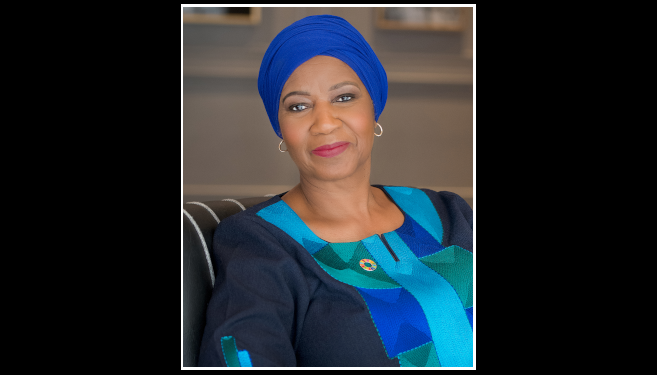 The 1995 World Conference on Women: Where to for South Africa and the Rest of the African Continent, was the theme for the virtual Chief Albert Luthuli Memorial Lecture.

Hosted by UKZN in partnership with the Luthuli Museum and the Department of Sports, Arts and Culture (DSAC), the webinar aired nationally on SABC.

Journalist and facilitator for the annual event Ms Desiree Chauke noted the scourge of gender-based violence (GBV) in South Africa and the world, emphasising that the webinar’s keynote address by United Nations Under-Secretary-General and Executive Director of UN Women Dr Phumzile Mlambo-Ngcuka could not have come at a better time!

Deputy Vice-Chancellor and Head of the College of Humanities Professor Nhlanhla Mkhize lauded the ideals and achievements of Chief Albert Luthuli, recognising how the debate spoke to the key values, policies and practices of UKZN which are embedded in equal participation.

Explaining UKZN’s obligation in promoting the rights and wellbeing of women through community outreach and activation programmes, Mkhize said: ‘Our Institution has put in place stringent measures to guarantee an enabling environment where women can study, work and live without the fear of GBV, including sexual harassment.’

He suggested that more could be done in partnership with the Luthuli Museum and the DSAC to stop GBV, welcoming Mlambo-Ngcuka as a trailblazer and an exemplar of the outstanding spirit of Inkosi Albert Luthuli.

DSAC Minister Mr Nathi Mthethwa said he was delighted that the Luthuli Museum had invited a woman to speak for the second year in a row, an action that Luthuli would have been proud of.

Mthethwa, who said Luthuli was a man who did not see gender and in his youth was open to doing household chores reserved for women, shared his hopes for South African men to follow the good example, especially during the 16 Days of Activism for no Violence Against Women and Children.

Mthethwa commented on the theme and the progress made in connection with the acceptance of men and women as equal contributors to the future while acknowledging this as an attribute greatly admired in Luthuli and evident in his household.

Keynote speaker Mlambo-Ngcuka said she was honoured to be presenting the lecture in celebration of the 25 years since the Beijing Declaration at the Fourth World Conference on Women and the platform for action.

She paid tribute to Luthuli and his wife Nokukhanya Luthuli for their contributions to the country and their values which are embraced in the South African constitution.

Reflecting on South Africa’s participation in Beijing - which had been led by Dr Nkosazane Dlamini-Zuma - and the progress made since then, she outlined the government’s investment in the education of girls, women’s health, ministries and commissions. She added that difficulties were still being faced in the area of customary and religious laws.

Mlambo-Ngcuka focused on women’s participation in leadership and the work that still needed to be done to maintain parity, as global statistics showed the representation of women in parliament was an average of 25%.

Commenting on how economies are not structured to support women and the lack of mechanisms in place to implement gender equality, Mlambo-Ngcuka highlighted the burden of home care as an issue that needed to be addressed in order for women to thrive in the workplace.

She urged society to end the scourge of GBV - noting the increase in violence during the Coronavirus pandemic - and touched on the importance of digital infrastructure and the need to close the existing gender digital gap.

Mlambo-Ngcuka examined how women were still the most affected by poverty and highlighted ‘the need to build back stronger and better than before the pandemic by addressing and changing economic policies to enable women to benefit in a significant and meaningful way’.

In closing she said: ‘Malibongwe igama, leNkosi Albert Luthuli,’ thanking Luthuli for giving women ‘a seat at the table.’

Other speakers involved in the event included:

•    Director of the BAT Centre Trust Ms Nise Malange who asked the nation to unite and stand as one in saying #Sekwanele with GBV.

The daughter of Chief Albert Luthuli and Luthuli Museum Council member, Dr Albertina Luthuli, thanked everyone for recognising her father and acknowledging everything he stood for. She also thanked Mlambo-Ngcuka for honouring her invitation and presenting a thought-provoking lecture to South Africa and the world.