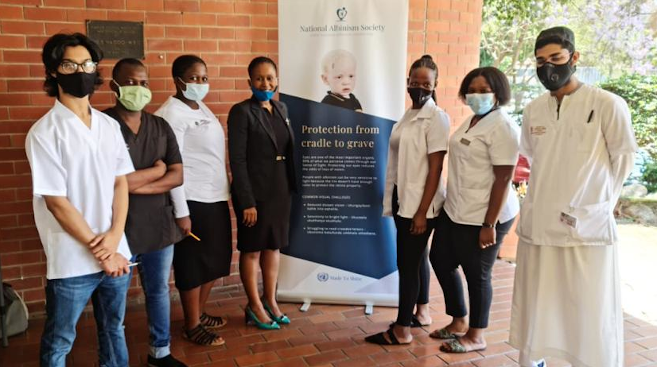 Mrs Zamadonda Xulu-Kasaba (fourth left) from the Optometry Department at UKZN with students from the department and some of the attendees from the community.

UKZN Part of Campaign to Assist People with Albinism

An eye care and skin cancer awareness campaign - organised by UKZN’s Optometry and Dermatology departments in partnership with the Department of Health and the National Albinism Society (NAS) - was held for people with albinism in the iLembe district on KwaZulu-Natal’s North Coast.

The campaign, titled Protection from Cradle to Grave, counselled people from the ages of 3 to 73! A total of 49 people were seen by six Optometry students and four Dermatology consultants.

The district’s local municipalities - Mandeni, KwaDukuza, Maphumulo, and Ndwedwe - transported those in the albinism community to the General Justice Gizenga Mpanza (GJGM) Regional Hospital in KwaDukuza.

Free services included an eye screening and educational talks by Mrs Zamadonda Xulu-Kasaba of UKZN’s Department of Optometry and Ms Gillian Lawrie and Ms Annah Sishange of the Department of Dermatology.

It was a fruitful day for participants as well as the students, who all learned a lot and benefitted from the health services offered.

Xulu-Kasaba thanked the multidisciplinary team, under the leadership of Dr Bhekisisa Maxwell Thabethe of the NAS, for providing much needed services to the people. ‘As an avid public health advocate, who is passionate about accessibility of eye and other health services, I congratulate the team for their efforts.’

She also thanked the hosts of the campaign.