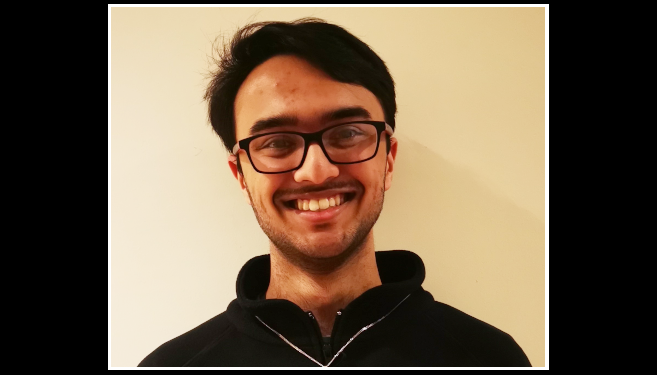 Mr Aaron Naidu won a bronze award at the 2020 International Olympiad in Informatics.

First-year UKZN BSc student in Data Science, Mr Aaron Naidu is one of two South Africans who won bronze awards at the 2020 International Olympiad in Informatics.

The competition brought together top students in the field of informatics and provided a platform for them to share information about their respective countries’ cultures and scientific achievements in the field.

Hosted by a different country each year, the 2020 event was organised online by Singapore with participating countries represented by teams of four. Naidu joined his three teammates, who were based at Stellenbosch University, virtually for the event from his home in Durban.

The contest, which involves 10 hours of computer programming and algorithmic problem-solving over two days, requires competitors to design and implement solutions to six challenging problems individually. The solutions are evaluated automatically in real-time using secret test data for grading.

Naidu said it was disappointing but understandable that because of COVID-19 the event had to be held online instead of in Singapore. He was delighted, however, with his bronze award after chalking up considerable experience participating in local and national Olympiads over many years.

The event was well organised and ran smoothly, with competitors around the world linking in to the Singapore event at the same time.

Naidu said he thought South African students had a way to go yet before reaching the level of their international peers in computer science. He suggested that offering information technology as a subject in all South African schools would boost the country’s performance and enhance learners’ experience of the subject.

Naidu, who attended Eden College, was KwaZulu-Natal’s top matriculant in 2019 and came second in South Africa, achieving nine As, 100% for Core Mathematics and 99% for Advanced Programme Mathematics.

He was a member of the Siyanqoba Regional Olympiad Training Programme for six years (run by UKZN’s Emeritus Professor Poobhalan Pillay) which equipped him with additional training to participate in the South African Mathematics Olympiad (SAMO) against thousands of other top mathematics students in the country.

Naidu was the top student in the SAMO a record three times and finished in the top five on six consecutive occasions. He is the only student to ever win the Tertiary Mathematics Olympiad outright while still in high school.

He received silver medals in South Africa’s Computer Programming and Physics Olympiads in 2019, as well as a bronze medal at the International Mathematics Olympiad. A keen table tennis and chess player, he represented South Africa at the World Youth Chess Championships in 2014.

Passionate about mathematics, because it forms the basis for so many other scientific fields, Naidu plans to pursue a career that allows him to combine his love of maths, informatics and data science.