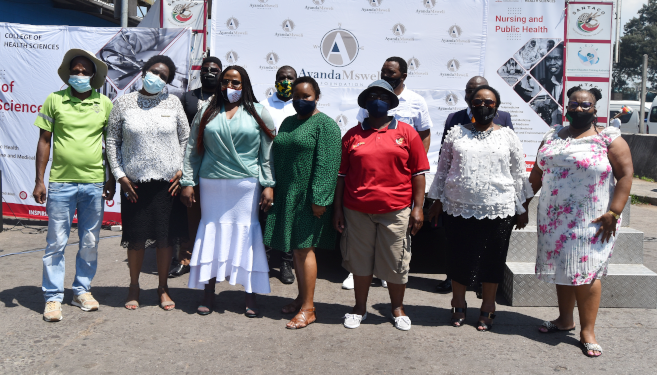 Campaign Against GBV in Public Transport

In collaboration with the Ayanda Msweli Foundation, the Commission for Gender Equality and the minibus taxi industry, UKZN launched a campaign against gender-based violence (GBV) in the transport industry at Durban West’s Pinetown taxi rank.

The Phepha Thembeka Vikela Against Gender-Based Violence campaign aims to engage the taxi industry - associations, owners and drivers - as well as other key stakeholders to promote respectful and non-violent behaviour towards commuters, prevent sexual and gender-based violence and harassment, particularly manifestations of sexual violence, and promote gender equality and the safety of women and children within the taxi industry.

‘The campaign aims to identify behaviours that denigrate women, enhance respect and dignity for women commuters and mitigate any behaviour that may perpetrate GBV in the industry,’ said College of Health Sciences Deputy Vice-Chancellor, Professor Busi Ncama.

UKZN’s Professor Gugu Mchunu said public transport is an essential part of daily life for many South Africans, and that taxi ranks have always been viewed as a safe haven from criminal activities. She emphasised that taxi ranks should be health promoting environments.

‘Gender-based violence in public transport has become a common occurrence. Incidents may range from the relatively “mild” to the “very serious”. The dangers women face in public transportation include catcalling, unwanted attention, inappropriate physical contact, derogatory language, and branding, and a range of other invasive sexualised behaviours,’ said Mchunu. ‘In order to holistically address GBV in the country, we saw a need to focus on public transport, starting with the taxi industry.’

Both professors have worked on a number of projects involving the taxi industry.

Road safety ambassador, Mr Ayanda Msweli said the campaign will start by identifying stickers and branding that are derogatory to women. The aim is to eliminate these from the industry. He emphasised that taxi drivers are doing a sterling job in the community and encouraged them to continue to protect women and to make them feel protected in taxi ranks.