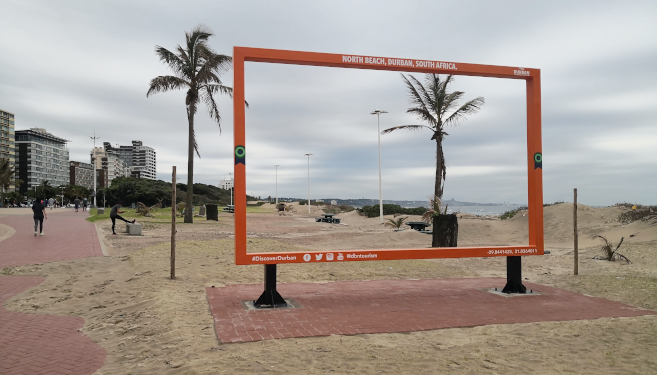 A fixed coastline like that pictured in Durban is unable to respond well to natural sediment dynamics and coming sea level change.

Professors Andrew Green and Andrew Cooper of the Discipline of Geological Sciences at UKZN are among the authors of a paper published in Nature Climate Change that refutes recent suggestions that half the world’s sandy beaches could become extinct by the end of the 21st century.

The international team of coastal scientists from the United Kingdom, France, South Africa, Australia, New Zealand and the United States were responding to a claim made by European researchers in a paper published in Nature Climate Change in March 2020.

After re-examining the data and methodology underpinning the original study, the authors of the new paper, led by Cooper, an Honorary Research Professor at UKZN, disagreed with its prediction and concluded that, in light of the global data and numerical methods currently available, it is impossible to make such wide-reaching predictions.

A critical issue noted in the new research is that there is potential for beaches to migrate landwards as the sea level rises and shorelines retreat. The key notion behind this is that if beaches have space to move into under the influence of rising sea levels - referred to as accommodation space - they will retain their overall shape and form, but in a more landward position. Given no impediments to their movement, they will ultimately survive.

Researchers say that beaches backed by hard coastal cliffs and engineering structures, such as seawalls, are indeed likely to disappear in the future due to sea-level rise as they are unable to migrate landward. They will first experience “coastal squeeze” resulting in decreased width, and will eventually drown or be eroded.

‘Strongly engineered coasts cannot cope with rising sea levels when, in tandem with wave action, sediment is stripped from beaches, but moved onshore into areas where beaches are not engineered to be,’ said Green. ‘The current Durban beachfront is a good case in point; it is evident that during the windy season, large quantities of sand are blown into the back-beach environments, but there is no place for this to settle as these areas have been converted into roads and hard infrastructure. This is a small subset of what will continue to happen when sea levels rise and coastal squeeze becomes more pressing.’

However, the research points out that beaches backed by low-lying coastal plains, shallow lagoons, salt marshes and dunes will migrate landward as a result of rising sea levels. In these cases, the shoreline will retreat, but the beaches are likely to remain, albeit a little raised in elevation and located landward, rather than becoming “extinct”. Cooper added, ‘As sea levels rise, shoreline retreat must, and will, happen but beaches will survive. The biggest threat to the continued existence of beaches is coastal defence structures that limit their ability to migrate.’

‘Most of South Africa is not heavily urbanised, and as such the areas of the coast that are heavily engineered are relatively small when compared with places such as The Netherlands, making us far less vulnerable to the impacts of rising sea levels. Cities may not be as lucky given their strongly defined hard shorelines behind the beaches,’ said Green.

The new paper notes that there is currently no information on the global number of beaches that fall into either the extinct or surviving category and, as such, it is impossible to quantify what proportion of the world’s beaches will disappear between now and 2100.

‘Numerical equations and models employed by coastal and civil engineers are often unsuitable without a strong link to geological and morphological observations, and applying these at broad scales can be very damaging to coastal management plans,’ added Green ‘Coastal management needs a broader and more holistic range of inputs to ensure decision making is more resilient.’

The authors of the paper concluded that the removal of coastal seawalls and hard back-beach structures (termed managed re-alignment), together with nature-based solutions such as those experienced in Durban, like beach nourishment, may be the only methods to safeguard the future of urban beaches.

As Green summed it up, ‘it is likely we will need to start looking for sand resources for coastal nourishment as the onshore resources such as river sands and coastal dunes slowly dwindle in volume. One key place is the offshore environment, beyond the beach where many countries from around the world have begun to turn their attention for the future.’