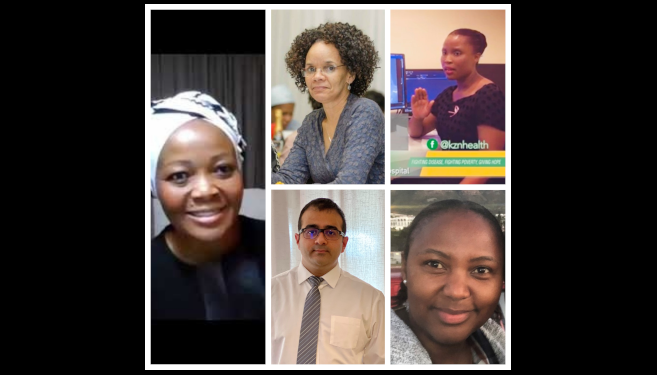 The possibility of surviving and thriving while living with cancer as a chronic illness was the focus of discussion at a webinar hosted by the College of Health Sciences in partnership with UKZN’s Corporate Relations Division.

Facilitated by Head of Internal Medicine Professor Nombulelo Magula, the debate highlighted the diagnosis of, treatment for and possible recovery from various types of cancer, including ovarian and cervical, head and neck, breast and prostate.

According to the World Health Organization (WHO), cancer is the second leading cause of death globally and was responsible for an estimated 9.6 million in 2018. Globally, about 1 in 6 deaths is due to cancer.

The most common type in women is breast cancer while among men it is prostate cancer. The National Cancer Registry of South Africa recorded 223 102 active cases of cancer over a five-year period.

UKZN’s Head of Obstetrics and Gynaecology, Professor Motshedisi Sebitloane said, ‘According to the Cancer Association of South Africa, despite breast cancer being the most common type of the disease in women, it was cervical cancer that was the biggest killer, which is related to several subtypes of HPV. With regards to ovarian cancer, women highest at risk are those between the ages of 50-60, with a family history of cancer, gene mutations including breast cancer Gene 1 (BRAC1) and BRAC2, long-term use of Estrogen hormone replacement therapy as well as the early onset of menstruation or starting menopause later in life.’

Sebitloane said there was no easy fix for ovarian cancer. ‘There is no pre-malignant phase and since the ovaries are located deep in the pelvis, they are not easily accessible for screening. Most women are unfortunately only diagnosed when they are stage 2 or 3. However it is preventable by longerm (at least 5 years) use of the combined oral contraceptive pill, which has been shown to afford protection of at least 15 years beyond usage. Screening involves identification of high risk families, as well as detection of Ca 125, a tumour marker, followed by pelvic ultrasound,’ said Sebitloane.

Dr Zuzile Zikalala is a radiologist and Head of the KZN Breast Care Centre of Excellence based at the Inkosi Albert Luthuli Central Hospital (Imaging). She also serves as an honorary lecturer at UKZN and is involved in registrar training, also spoke at the event. Passionate about women’s health and specialising in breast cancer imaging, Zikalala said 201 million women were diagnosed annually with breast cancer, resulting in 627 000 deaths.

The risk factors include being female, having BRAC1 and BRAC2, obesity, consuming alcohol and smoking as well as hormone therapy.

Amongst men, about 1% was diagnosed with breast cancer.

‘It is important to create an awareness that breast cancer can be beaten through screening, self-breast examination, early diagnosis, and an annual mammography for women over the age of 40,’ said Zikalala. ‘Government needs to invest more in research, innovation and technology development.’

Another speaker, Head of the Department of Otorhinolaryngology (ENT) at RK Khan Hospital in Durban and an honorary lecturer at UKZN Dr Blossom Lungelwa Sigonya is an advocate for prevention by an awareness of risk, early detection and management of head and neck cancer as this ensures better outcomes and organ preservation.

Sigonya stressed that consumption of alcohol and smoking were the leading causes of up to 75% of all head and neck cancers while surgery, chemotherapy and radiation were the primary treatments. She said head and neck cancers could be beaten through quitting bad habits, timeous assessment of lesions, reducing the risk of HPV infection, maintaining proper care of dentures and using sunscreen daily.

A junior consultant urologist at Saint Aidan’s Regional Hospital in Durban and an honorary lecturer at UKZN Dr Avikar Singh has been involved in the care of patients with prostate cancer throughout his training and time as a urologist. Singh said prostate cancer (PC) was the most common non-cutaneous malignancy in men.

‘One in eight men between the ages of 60 and 80 are diagnosed with PC. ‘Men at risk are those above the age of 55, with a family history of either PC or who have a mother or daughter who was diagnosed with breast cancer as well as Black African men and those with diets rich in saturated fat and red meat.

Singh says PC can be beaten if detected and diagnosed in the early stages.

Magula closed the webinar saying: ‘So it seems that most cancers can be beaten through early diagnosis and treatment, screening and prevention. It is important that we get this message out to encourage people to screen early on so that treatment can begin.’

•   Sebitloane announced that on 17 November, a global strategy to accelerate the elimination of cervical cancer will take place online between 14h30 and 16h00. More information is available on the WHO website: www.who.int