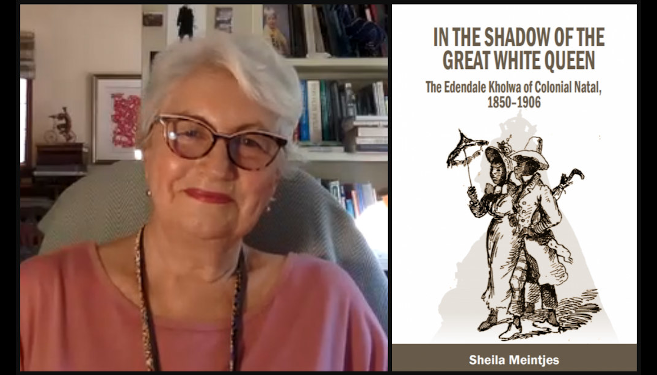 Launch of New Book on Edendale by Wits Academic

The College of Humanities recently co-hosted a virtual book launch of In the Shadow of the Great White Queen: The Edendale Kholwa of Colonial Natal 1850-1906, by Professor Sheila Meintjes of the University of the Witwatersrand.

Others involved in organising the launch were local NGO Sinomlado Centre, Queens University in Canada, and the Msunduzi Library.

The launch was part of the Edendale History Project, a community engagement initiative seeking to document the history of Edendale in Pietermaritzburg.

Meintjes has painstakingly chronicled the history of Edendale and the complex socio-political factors that influenced its development.

The book tells the story of Kholwa, a zealous African convert to the Christian faith convinced about the supremacy of its spiritual value and about the Edendale community’s pre-colonial origins, its formation and its interactions in colonial society. It draws heavily on the historiography of South Africa that emerged during the 1970s and 1980s, beginning with the merging of Africanist and materialist concerns.

The book, based on Meintjes’s doctoral thesis, chronicles the history of one of the earliest 19th century mission stations in colonial Natal, and traces the transformation in the lives of a community that settled first at Indaleni near Richmond and later at Edendale, a few kilometres from Pietermaritzburg.

‘Edendale’s history is rapidly disappearing from the collective memory as old people pass away,’ said Meintjes. ‘The background of the sources used in writing the book had to be interpreted through the prism of their particular social context in order to be used with any fruitfulness in reconstructing the history of the Edendale community. Whatever views were expressed by missionaries, officials, newspapermen or colonists had to be understood within their particular ideological perspective, and particular circle of social reality,’ said Meintjes.

Bringing gender and health issues to the foreground, Epprecht says the book reveals many unexpected or forgotten triumphs against environmental injustice, as well as unsettling continuities between colonial, apartheid, and post-apartheid policies to spur economic growth.

‘Sheltered from the glare of national media and often overlooked by scholars, smaller cities like Edendale attract political patronage, corruption, and violent protests, while rapid climate change promises to further strain their infrastructure, social services, and public health,’ he added.