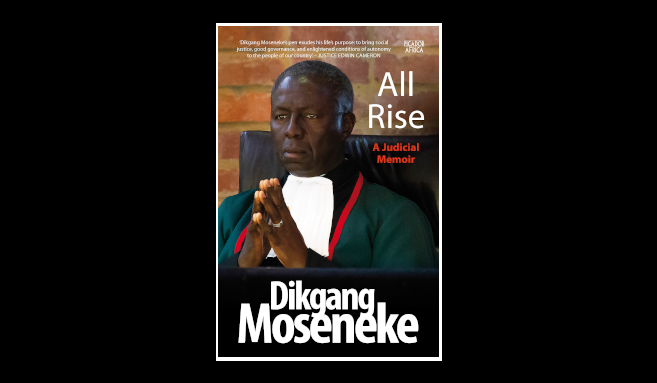 All Rise: A Judicial Memoir - a new book penned by former Deputy Chief Justice Dikgang Moseneke - was the focus of discussion at a webinar hosted by UKZN’s School of Law in collaboration with Pan Macmillan Publishers.

Speaking during the webinar, Moseneke described the work as not just a memoir but a history book that recalled the establishment of the Constitutional Court in 1994 and debates at the time, about whether Nelson Mandela had appointed an appropriate Bench. Highlighted in the book is the background to the establishment of the South African Truth and Reconciliation Commission (TRC) by the Government of National Unity in 1996 to help deal with the atrocities under apartheid. The book ends with a discourse about the Life Healthcare Esidimeni tragedy which involved the deaths of 143 people at psychiatric facilities in Gauteng from causes including starvation and neglect. Justice Moseneke was appointed by the State President to chair the Commission of Inquiry into the tragedy.

Also described is Moseneke’s journey to being appointed Deputy Chief Justice, the contests for political power within the ruling elite, how judgments are written, and the vast range of responsibilities attached to judicial functions, among many other interesting issues.

‘This “judicial memoir” details some of my experiences on the bench, which many judges, particularly South African judges, are reluctant to disclose as the culture is one of silence and non-disclosure. Hence, I saw this as an opportunity for me to break that culture,’ said Moseneke.

In his remarks, Freedman spoke about criteria for the appointment of a new chief justice which takes place next year, and whether it was time to install South Africa’s first female chief justice.

Gabriel asked that when Moseneke says ‘All Rise,’ how should civil society, Law students and legal counsel live up to this call to action?

Moseneke responded that South African citizens should call for civil accountability and should engage in active citizenry. ‘People must realise that civil accountability is part of their duty. We need young people to occupy positions where they energise those institutions that we need to operate efficiently,’ he said. ‘I want bright young lawyers coming out of our universities to be inspired to be in the mould our current National Director of Public Prosecutions Shamila Batohi, and saying they also want to be prosecutors.

‘All Rise is meant to awaken our young people and society to the fact that there is a lot that can be done and a lot that we have to do,’ said Moseneke.

Reddi advised everyone to read the book, which she describes as a candid account of Moseneke’s experience as a jurist.

‘The parting piece of advice that he has given us, which I hope will resonate with everyone, is that we have to try to be active citizens and all rise to the occasion. The book has been written in a style that makes it relatively easy for everyone to understand,’ said Reddi.

‘Justice Moseneke has generously donated 30 copies of the book to UKZN - they will also be available to students in disciplines other than Law, in the libraries on our various campuses,’ she added.