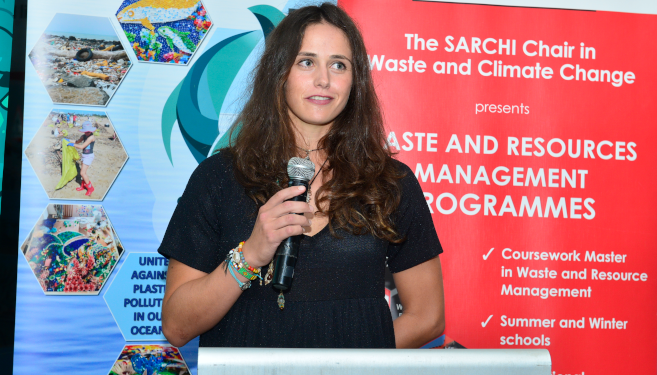 Ms Michaela Geytenbeek explains the problem of plastic pollution in the Umgeni River.

UKZN hosted a cocktail event on the Howard College campus on 18 February with the theme: Zero Waste Rivers: The Neptune Project.

Spearheaded by South African Research Chair (SARChI) in Waste and Climate Change, Professor Cristina Trois, the Neptune Project brings together engineers and experts in the waste management sector to explore and find ways to preserve our rivers and oceans from pollution. Ms Michaela Geytenbeek, a master’s student in Environmental Engineering, is working under Trois to find ways to tackle waste and pollution, particularly plastic pollution in South Africa’s oceans and rivers. Her research focuses on the constant stream of waste that flows down the Umgeni River.

‘During our daily activities we generate a multitude of waste - largely unintentionally,’ said Geytenbeek. ‘It is this waste that is flooding our rivers and oceans. Waste is everywhere, in the trees we sit under, floating down the rivers we love, clogging the Earth’s airways. As an earth child, this breaks my heart. We have a waste epidemic in dire need of curing and I hope my research will contribute towards this.’ Geytenbeek has also collaborated with the Durban Green Corridor in her research to improve the Umgeni River.

Several stakeholders from water purification and waste management companies such as the Duzi uMgeni Conservation Trust (DUCT), Waste Action Tribe, Umgeni River/Dusi and Durbanites Against Plastic Pollution (DAPP) were invited to the event to learn about the Neptune Project and encourage them to join the fight against river and ocean pollution.

The evening also served as a platform to publicise the upcoming Dusi Canoe Marathon, one of the biggest canoe races in Africa which sees participants paddling from Pietermaritzburg to Durban. Geytenbeck encouraged her audience to witness the pollution that our rivers are exposed to and take a stand against river pollution.