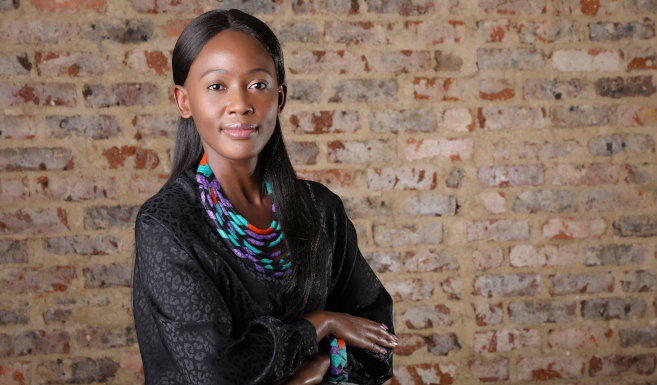 Dr Zama Msibi, a Physiology lecturer in the School of Laboratory Medicine and Medical Sciences (SLMMS), graduated with a PhD in Neuroscience (Physiology) for her study entitled: Combination of Gold Nanoparticle-Mediated Gene Therapy and Oleanolic Acid in Treatment of 6 Hydroxydopamine-Induced Parkinsonism.

Her novel study aimed to provide better understanding of the management and treatment of the brain disorder, Parkinson’s disease (PD), through nanotechnology gene therapy.

Parkinson’s disease is a progressive neurodegenerative disorder that has become more prevalent over the past decade. Cases gradually increase as life expectancy increases, contributing to the already high cost of PD treatment. The lack of effective disease-modifying treatments adds to the impending PD pandemic. One of the key aspects of Parkinson’s is that it affects the predominately dopamine-producing (“dopaminergic”) neurons in a specific area of the brain called substantia nigra.

Through the use of nanotechnology gene therapy, Msibi’s study focused on better understanding Oleanolic acid (OA). Oleanolic acid is a biologically active pentacyclic triterpenoid compound that has previously been shown to provide neuroprotection in PD preclinical studies; however, the mechanism by which this effect is exhibited is unknown.

Msibi’s study was supervised by the Dean and Head of School: SLMMS, Professor Musa Mabandla, who is an expert in neuroscience. Msibi commented, ‘It has been a long journey since I first had that meeting with Professor Mabandla as a prospective supervisor. I would never have guessed that I would gather so much knowledge and skills along the way and I am grateful for his patience in teaching me some of the basics of the brain. My supervisor allowed me to choose a research topic that has not been explored in our lab, making use of nanotechnology in Parkinson’s disease targeted gene delivery. With my background in genetics and his current research on medicinal plants, I went on a multi-disciplinary trajectory of research I never would have even imagined was possible.’

Msibi is passionate about mentoring young people in the sciences. During her free time, she engaged in philanthropic activities for disadvantaged schools in Umkhumbane, where she served as one of their teaching assistants. ‘My passion for philanthropic work was re-kindled by this involvement, leading me to co-find an NPO called “Future Legends” with some of my colleagues. The main objective was to empower learners from disadvantaged backgrounds. We focused on high schools in Umlazi Township. We recruited mostly postgraduate students and a few Medical students at UKZN to assist with extra classes during weekends. We entered some of the learners in the Eskom Expo for Young Scientists competition,’ said Msibi.