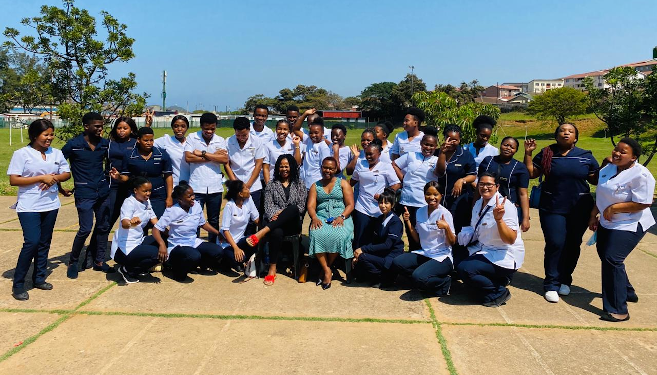 Second-year Bachelor of Nursing students with their lecturers.

UKZN’s second-year Nursing students conducted an intervention programme aimed at making a positive contribution in the fight against drug abuse in Austerville, Durban, as part of their Community Nursing module.

The students presented their programme at Fairvale Secondary School where they briefed Grade 9 learners about the dangers of taking drugs.

The presentation covered all the different types of drugs found specifically in the community and showed the impact of drug taking on the human body. There was also a short drama presentation on drug abuse.

‘The students identified drug abuse as one of the main problems and an area in which they believe they can make a difference,’ said UKZN lecturer Silingene Ngcobo. ‘The information presented to the learners was simple and easy to understand but at the same time promoted good health and the prevention of illness.’