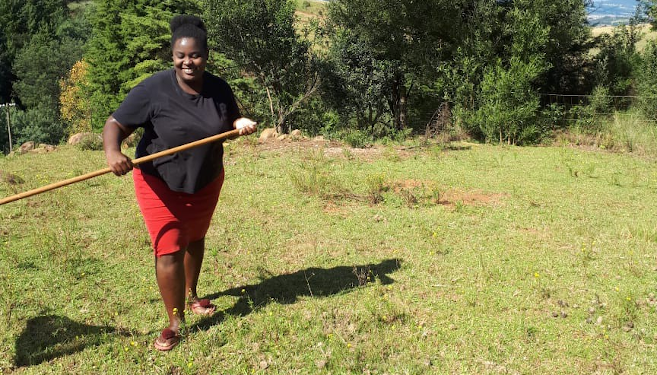 Ms Lindelwe Mabika has won an award for conducting research on the use of grass as a biocontrol agent.

Ms Lindelwe Mabika, who completed a Biological Sciences Honours degree in 2019, has received the JD Scott Award for the best student in Grassland Science after conducting research on the use of grass as a biocontrol agent for a plant that is invasive in numerous countries.

Supervised by Dr Michelle Tedder and Dr Terry Olckers, Mabika tackled a project examining whether grass competition and insect root-feeding could inhibit the growth and reproduction of fireweed (Senecio madagascariensis).

The fireweed, native to southern Africa and distinguishable by its small, yellow flower, is a major invader in areas in Australia, Colombia, Uruguay, Brazil, Argentina and Hawaii, among others. Fireweed competes with indigenous plants in those countries, invading woodlands, grasslands, roadsides and pastures, where it is harmful to livestock that eat the toxic plant and is also unsuitable for use as a decorative plant.

Mabika was interested in the project as it combined her love for entomology and ecology, employing natural solutions to combat a problem currently being approached using expensive and sometimes harmful chemicals. She began by planting her grasses from seed at UKZN’s Botanical Gardens on the Pietermaritzburg campus, and collecting fireweed from around the city and tiny flea beetles (Longitarsus basutoensis) in Howick.

Having never before considered grass as a biocontrol agent, Mabika found in her project that grass competition was effective in curbing the growth and reproduction of the weed as the grass roots competed with the roots of the fireweed, while the beetle activity also targeted the roots. She noted that the types of grass used did not necessarily affect their efficacy, and suggested that countries where the plant is invasive could use their own indigenous grasses to control the problem. Mabika’s work showed promise for further studies to investigate biocontrol options for fireweed.

Mabika, who is from Jozini where she attended Sinethezekile Combined School, was initially interested in pursuing a career in Medicine but was accepted at UKZN for studies in Agricultural Management. During her first-year, she realised the range of options available to her and changed her degree to pursue biological sciences.

Despite having to combat a language barrier when she entered university, and struggling financially before getting a bursary in second-year, Mabika excelled at the subjects she was passionate about, saying that research made science fun. She was proud to receive this award, named after the late Professor James Donald Scott, South Africa’s first Professor of Pasture Management and Soil Conservation and the first elected Dean of the then University of Natal’s Agricultural Faculty.

Mabika, who is now looking for employment in biological or environmental fields, thanked Tedder and Olckers for their attentive supervision, and her friends Dr Daniella Egli, Mr Seth Hakizimana, Dr McMaster Vambe and Ms Samukelisiwe Colvel for their support and encouragement. She also thanked her family for their support, and said her Christian faith and belief in God helped her to get to where she is.