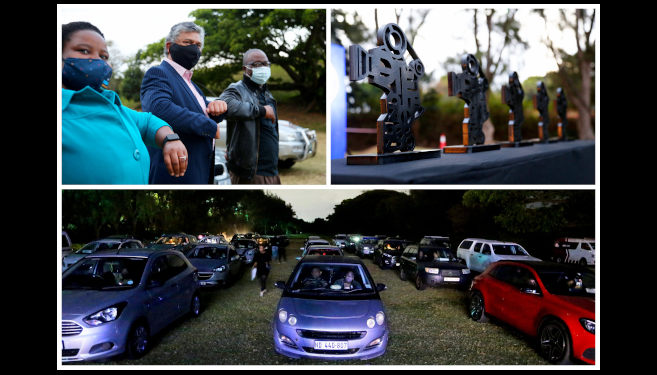 Highlights of this year’s DIFF awards.

After a drive-in screening of the closing film Dust, a thriller by Pieter du Plessis, the Durban International Film Festival (DIFF) award winners were announced during a pre-recorded ceremony.

The festival is hosted by the Centre for Creative Arts (CCA) in the College of Humanities.

In the shorts category, the judges emphasised how impressed they were with the overall quality of all 23 entries. The Best Short Filmwas Exam directed by Sonia K Hadad. The animation Ruby and Roach by Erentia Bedeker received the awards for Best African and Best South African Short Film. The judges commended the innocence of the film that does away with preconceived ideas.

Sam Soko was awarded Best Documentary for Softie. ‘It is increasingly important that we not only share our stories but protect the artists that do so,’ he said.

The opening film This is Not a Burial, It’s a Resurrection by Lemohang Jerimiah Mosese received the award for Artistic BraveryandBest Direction, with the Best Actress Award going to the late Mary Twala.

Film Stam (The Tree) directed by Louw Venter won the Best South African Film Award. The Best CinematographyAward went to Take Me Somewhere Nice by Ena Sendijarevic. Farewell Amor scooped two awards for Best Screenplay and Ntare Guma Mbaho Mwirewas named Best Actor, the first award that he has ever received as an actor. In his speech, he noted the profound impact that the late, great Joseph Shabalala had on his career.

Jawad Rhalib received the Amnesty International Human Rights Award for FADMA: Even Ants Have Wings. Navlia RawHeath from Amnesty International Durban said that, ‘the film was chosen because of its fascinating depiction of the passive resistance and gentle yet firm action towards changing deep-seated prejudices about stereotypical roles of the sexes.’