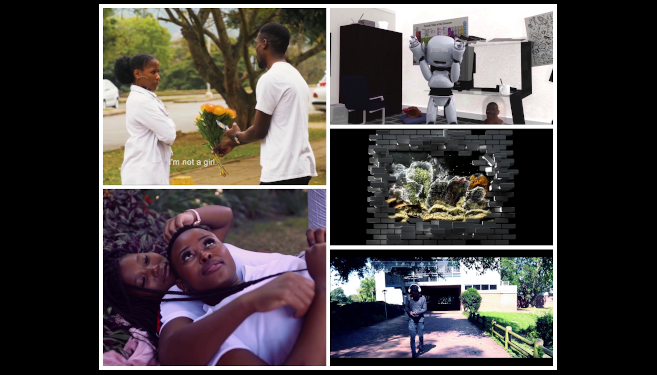 Some of the UKZN student films featured during the Durban International Film Festival and isiPhethu industry programme.

Students, faculty and staff from both universities collaborated on a number of events and panels, sharing ideas, documentary, animated, and fiction films, and commitments to collaborative arts and social justice.

Project Officer at the Centre for Creative Arts (CCA), Mr Sakhile Gumede and Film at Mason’s Production Manager, Ms Abbesi Akhamie co-ordinated the multifaceted programme for Creative Arts. The film discussion was part of the isiPhethu industry programme that aims to entertain, educate, train and up-skill, and instil confidence in young aspirant film-makers and share information that is relevant to the film industry to empower young people.

Digital Arts lecturer Stewart said, ‘The show reel of the films from both UKZN and George Mason University were put up on the DIFF social media platforms for everyone to view beforehand. The films were strong and there were significant synergies between the two show reels. As institutions, we agreed that this is a relationship that we would like build on in the future. It was a dynamic and exciting experience for everyone.’

Gemmell said the programme is important for students, ‘because it is a site for learning, growth and inspiration. The festival also provided a platform to showcase work that might normally go unrecognised, ultimately giving us access to an international network of interested and like-minded individuals.’

Films featured and discussed during the programme were: