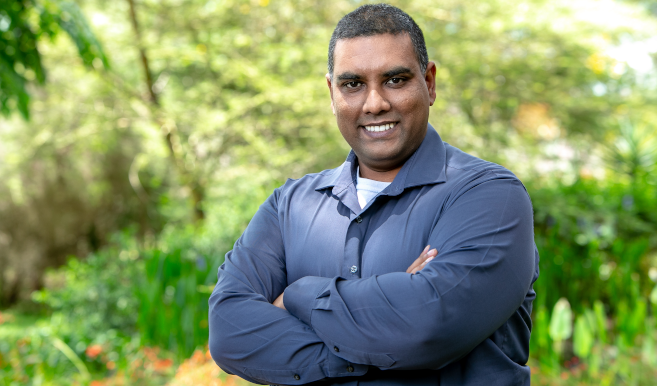 High impact researcher in the College of Health Sciences and KRISP, Dr Veron Ramsuran, says he is thrilled to be the winner of the prestigious UKZN Vice-Chancellor’s 2019 Award valued at R150 000.

The award is presented annually to a pre-eminent researcher at UKZN in recognition of outstanding research achievements and the international reputation acquired.

UKZN Vice-Chancellor and Principal, Professor Nana Poku, congratulated Ramsuran, saying: ‘Please accept my heartfelt congratulations on this prestigious award. I wish you well and trust that it will assist you in your future research endeavours.’

Ramsuran, who graduated with a PhD from UKZN concentrating his research on host factors associated with HIV disease, completed the bulk of his doctoral work in two United States laboratories - the Fred Hutchinson Cancer Research Center in Seattle, Washington, and the University of Texas Health Science Center in San Antonio, Texas.

He later became a postdoctoral research fellow at the Ragon Institute of MGH, MIT and Harvard before returning to South Africa as a senior lecturer at UKZN. He now holds several posts including Group Leader at the KwaZulu-Natal Research Innovation and Sequencing Platform (KRISP), UK Royal Society Future Leader African Independent Research (FLAIR) Fellow; Associate Scientist at the Centre for the AIDS Programme of Research in South Africa (CAPRISA), and guest researcher at the National Cancer Institute at the NIH.

He has also received numerous honours and awards and serves as an editor on two leading international immunology journals.

His work involves examining the effect host genetics play on HIV and TB and he has a special interest in examining the Human Leukocyte Antigen (HLA) genes, the epicentre of disease associations across the human genome, as determined by genome wide association studies. He is also interested in factors contributing to the differential HLA expression.

Ramsuran recently also received the Future Leader of African Independent Research (FLAIR) Collaboration award which he shared with UKZN’s honorary scientist at Oxford University in England, Professor Philip Goulder. The UK Royal Society award will fund their joint study that aims to find out why female babies have a two to three-fold increased risk of acquiring HIV compared to male infants. The researchers believe an epigenetic mechanism (changes not located on the DNA sequence effecting how genes function) may be responsible for the protection in males and this will be investigated further.