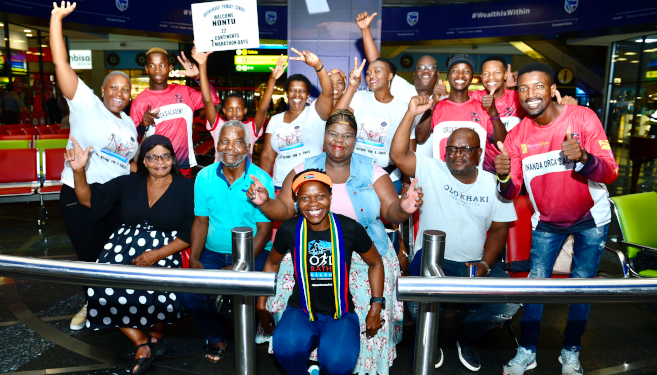 UKZN alumna, Ms Nontu Mgabhi, celebrates with family and supporters after her return from successfully completing the World Marathon Challenge.

Running a standard marathon (42,2km) is no mean feat – but UKZN alumna, Ms Nontu Mgabhi has upped the ante by running seven marathons in seven consecutive days on seven continents making history as the first African woman to complete the World Marathon Challenge!

Members of UKZN’s Corporate Relations Division were at King Shaka International Airport in Durban with other supporters to give Mgabhi a hero’s home-coming welcome.

The runner said being ‘resilient and efficient with time’ were key to her success as she and other participants had just 168 hours – including the time taken up by travelling between the start venues - to run the seven marathons on seven continents!

Challenges included flying for almost 80 hours and having time for only three showers due to the rigorous time constraints and delays caused by bad weather in Antarctica.

The intrepid traveller and sportswoman, who plans to conquer another demanding challenge next year, details of which she will reveal closer to the time, said her vision was to inspire people to overcome their fears.

Mgabhi raised more than R1.5m in sponsorship for the Khiphinkunzi Primary School in rural Mtubatuba in northern KwaZulu-Natal to help build five classrooms, two administration offices and improve the facilities at the under-resourced school.

To contribute towards much-needed improvements at the school, visit https://www.backabuddy.co.za/charity/profile/khiphinkunzi-primary-school or her website www.gobeyondforachild.com

She thanked her parents, James and Fikile Mgabhi, for always supporting her on her adventures. ‘It’s thrilling to see the excitement and the support because you don’t achieve something of this magnitude alone,’ she said.

Mgabhi acknowledged her key sponsors UKZN, sportswear brand Salomon, the Richards Bay Coal Terminal and the human resources consulting firm Powerpoint Lifestyles for the support and backing they gave her. ‘I am forever indebted to them,’ she said.

The marathons were held in the Antarctic, Cape Town, Australia, Dubai, Madrid, Santiago in South America and Miami.

Mgabhi was profiled in UKZN’s alumni magazine UKZNTouch before she set off on her latest adventure. To read more, visit: http://alumniaffairs.ukzn.ac.za/Libraries/UKZNTouch/UKZNTouch2019_web-min.sflb.ashx