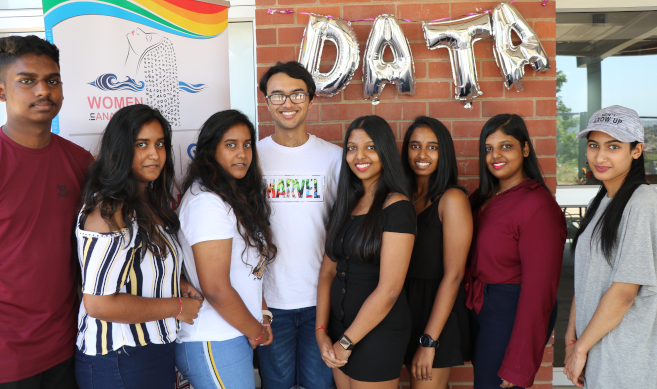 Top performing Maths scholars who registered at UKZN for a BSc degree majoring in Data Science.

A strategic recruitment campaign by UKZN’s Dean and Head of the School of Mathematics, Statistics and Computer Science (SMSCS), Professor Delia North, has reaped excellent rewards.

North explained that the advent of the Fourth Industrial Revolution had produced an insatiable demand for graduates highly skilled in data analytics, resulting in a critical shortage of such specialists nationally and internationally. ‘Data Science is an interdisciplinary field involving scientific methods, processes and systems to extract knowledge or insights from data,’ said North.

In 2018 the McKinsey Global Institute predicted that the demand for data scientists would outstrip supply by 60%!

‘The suite of Data Science qualifications is destined to place UKZN in a very strong strategic position nationally to contribute towards alleviating the extreme shortage of high-level data scientists in the country,’ said North. ‘All degrees are underwritten by an international statistics software company, Statistical Analysis Software (SAS), which is the gold standard for data analytics software in banks, government and major companies, around the world.’

Last year North deliberately targeted top performing youngsters with a flair for the mathematical sciences, and exposed them to the exciting field of Data Science as a possible future career path, through a series of targeted outreach activities among UKZN’s feeder schools.

North was delighted when during 2020 registration, nine top-performing Durban matriculants signed up to study towards a Bachelor of Science degree majoring in Data Science at UKZN.

At an informal function hosted by the SMSCS for the standout new recruits and their parents, North encouraged the group to network with each other and form a support group.

She thanked the parents for having faith in UKZN and assured them that the Data Science programme had excellent staff as teachers and mentors who would guide their children towards successful future careers.

‘With a Data Science degree there are lots of different directions to go in,’ said North. ‘I want you all to push the boundaries of the field.

‘Young bright minds such as yours are essential if UKZN is to contribute to new theories in Data Science. South Africa will benefit when high-end, data-savvy scientists such as yourselves enter the world of business.

‘The world is your oyster - UKZN will support and grow you in whichever direction you choose to go,’ added North.