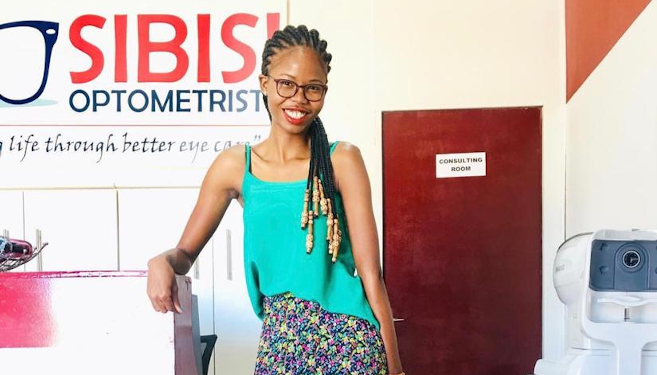 Sibisi, who grew up in the rural KwaZulu-Natal town of Dannhauser, completed her studies on the Westville campus in 2016.

She now owns Sibisi Optometrists at Tugela Ferry and co-owns Central Medical Centre in Pietermaritzburg which, was established last year.

‘I work in partnership with Mr Sthembiso Bhengu at the Central Medical Centre, where he is the resident optometrist while I fill that role at the Tugela Ferry practice,’ Sibisi said.

She began her career working at Torga Optical in East London as a resident optometrist later applying for a personal loan to start her own business.

‘I did a little research on how much it would cost me to open an optometry practice and completed a rough business plan - I have never looked back since then,’ she said. ‘I opened my Tugela Ferry practice in November 2017.’

Sibisi said when she started studying optometry she did not know much about the profession - and had never even had an eye test! ‘Because it seemed an interesting career at the time I took it on. Being self-driven and hard-working I fell in-love with optometry and the rest is history.’

At the beginning of last year, she went into partnership with two medical practitioners Dr Sanele Mdluli and Dr Saziso Mthembu, opening the Central Medical Centre in Pietermaritzburg.

Apart from her business, the Centre’s rooms are occupied by an occupational therapist, a physiotherapist, a social worker, a dietician and a clinical psychologist.

‘Being a young entrepreneur is not easy - it comes with a lot of responsibilities. I have survived because of what I think are my good leadership and communication skills.’

She is motivated by being able to make it in the world of work on her own. ‘I am ambitious and a risk taker - that is what drives me. My mother and her family are my biggest fans and my greatest support system.’

Her future goals are to open more practices in rural towns as a way of giving back to communities there.

Sibisi also hopes to pursue her masters and PhD degrees, and ultimately become an academic. ‘Sharing knowledge and teaching are among my passions.’