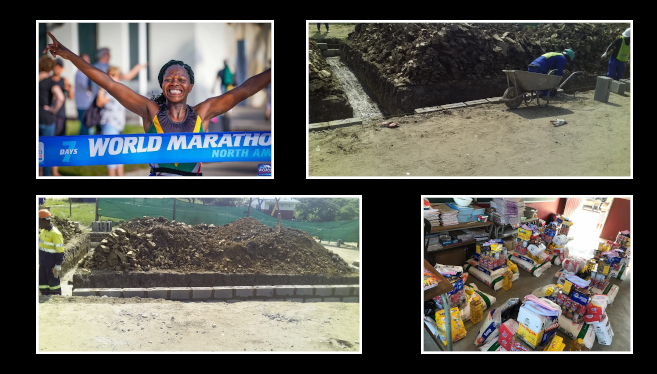 Fund raising efforts by UKZN alumna and ultra-distance runner, Ms Nontu Mgabhi, have borne fruit in the form of construction starting on extensions at the Khiphinkunzi Primary School in Dukuduku Village, in rural Mtubatuba.

The project, which involves the addition of five extra classrooms at the school, is expected to be completed by the end of the year.

Mgabhi made headlines and history recently by running seven marathons in seven days on seven continents to become the first African woman to complete the World Marathon Challenge. Her participation in the gruelling race formed part of her efforts to fundraise to cover the costs of extensions at the school.

Her campaign - Go Beyond for a Child - is all about supporting children’s education in deep rural areas as well as removing systemic inequalities and giving children a fair chance to succeed. ‘It is also about putting the focus on rural schoolchildren who are deserving and more than capable. We cannot afford to leave them behind,’ said Mgabhi.

She was humbled by the amount of support she received. ‘I couldn’t have done this on my own - there would be no Go Beyond for a Child Project without sponsors. There are more than 100 learners in some of the classrooms so I am delighted and relieved knowing their learning experience will improve with the addition of the new classrooms.’

The project’s reach has extended beyond the boundaries of the school and impacted on members of the broader community. ‘It has become a source of hope in Dukuduku Village,’ said Mgabhi. ‘From April to now, through partnership and financial support, I have helped to distribute more than 250 food parcels valued at about R1 000 each and 5 000 cloth masks to assist the community to comply with COVID-19 regulations.

‘The pandemic has highlighted the inequalities that exist. A number of learners from the school depend on food provided for them so when the school closed because of the virus, it meant no main meal. So I started fundraising for food parcels to assist.’

She became aware of the school’s plight in 2018 after running the Karkloof 100 Miler. ‘At the end of the run we were assigned to different underprivileged and underfunded schools to inspire kids through running and sport. I was assigned to Khiphinkunzi Primary School where I connected with the learners and I saw myself in them as a rural village girl who had emerged stronger - regardless of systemic barriers,’ she said.

Executive Director (Acting) of UKZN’s Corporate Relations Division Ms Normah Zondo was delighted with the project’s success and applauded Mgabhi for ‘flying the UKZN flag high and for staying true to our purpose of inspiring greatness!’ Zondo wished Mgabhi well on her future philanthropic efforts.

Some sponsors were forced to withdraw their support because of financial difficulties experienced during COVID-19. ‘I had to thus rationalise the project and build five classrooms,’ she said. ‘With R1.2 million raised, there is a shortfall of R400 000 as the total cost of building the five classes is R 1.6 million. I invite sponsors keen to support this cause to contact me at nontu.mgabhi@icloud.com,’ she added.

To get involved and contribute to this worthy project, visit: https://www.backabuddy.co.za/khiphinkunzi-primary

To find out more about Nontu’s journey, visit: