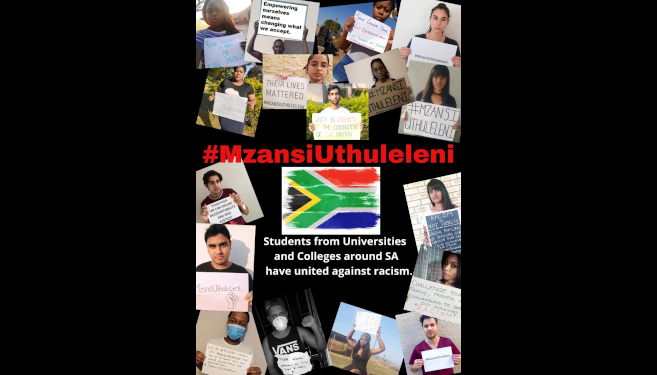 UKZN students who have joined the #MzansiUthuleleni movement.

UKZN Medical students and colleagues at various academic institutions in South Africa (SA) have formed #MzansiUthuleleni – a movement to challenge all South Africans to be aware of and protest against innocent lives lost due to injustices by individuals and organisations, including the police.

‘We are aware of the injustices that have occurred globally and in the United States, taking note of the uprisings following the killing of George Floyd, an innocent man who lost his life due to police brutality,’ said the President of the South African Medical Students Association, Miss Tivana Chellan.

‘As South Africans, we have, through social media, displayed immense support for the #BlackLivesMatter movement. It is now time we compel our judicial system, our President and our national government ministers to ensure a powerful message is sent to every individual, to the SA Police Services and the SA National Defence Force, that we are united people. Our duty is to protect our brothers and sisters and that there will indeed be repercussions of the highest order for robbing innocent individuals of their right to life.’

Said co-founder of the campaign, UKZN Medical student, Miss Sandisiwe Nxumalo: ‘Police brutality dehumanises our brothers and sisters and it should not be tolerated in any manner shape or form. We have created this petition to unite our people in the fight for justice for the murder of South Africans Collins Khoza, Sibusiso Amos and others. As the youth we have come together to speak out against these acts of brutality and our goal is to ensure that the members of the police and the SANDF responsible for such crimes be brought to justice expediently. Ultimately #MzansiUthuleleni means that we not only want justice but we insist on accountability and reparations for families who have lost loved ones.’