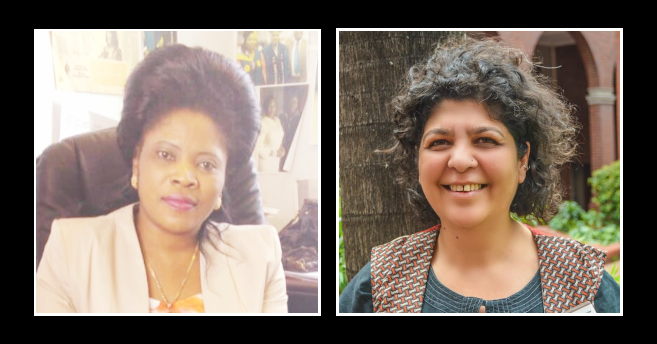 Professor Vivian Besem Ojong (left) and Ms Yasmin Rajah delivered a webinar on the impact of the pandemic on migrants and refugees.

South Africa has about 4.2 million migrants, approximately 300 000 refugees and roughly 279 000 asylum seekers, while the number of undocumented migrants is unknown.

This is according to the Dean and Head of the School of Social Sciences Professor Vivian Besem Ojong who was speaking during a webinar hosted on the Zoom platform by UKZN and Refugee Social Services (RSS) to commemorate World Refugee Month.

The webinar was titled: The Impact of Coronavirus on Migrants and Refugees: Government’s Response.

Ojong said COVID-19 was teaching civil society and academics new lessons about how these categories of people and their livelihoods were affected in times of crisis and disaster where national governments were forced to take urgent decisions.

She said COVID-19 had exposed the vulnerability of cross border and transnational identities. ‘It demonstrated that this group of people live in double-marginality and are not prioritised in terms of disaster as COVID-19 has shown. When all the countries around the world decided to lockdown their borders, they concentrated on locals - those who are residents. So these people who cross the border for livelihood missed the COVID-19 radar of most countries.’

She emphasised it was necessary to examine the “gross inequalities” in the way refugees and migrants were managed and called for the urgent opening of government offices that deal with processing documents for these vulnerable groups.

Director of Refugee Social Services in Durban, Ms Yasmin Rajah said refugees and asylum seekers in South Africa had freedom of movement in that they were not confined to refugee camps and allowed to work and study. ‘A refugee is somebody who has left their country of origin to escape persecution because of their political opinion, their race, religion, or belonging to a particular social group and for those reasons feared for their lives.

‘When they arrive in South Africa they make an application for asylum. In doing that, they receive a document that enables them to work and study and to move around freely - basically access rights they would enjoy if they were South Africans with the exception being the right to vote.’

However, things don’t not always work out the way there were designed to.

Rajah said there was already a huge backlog of people who were undocumented and due to the pandemic could not get appointments to get their documents from the Refugee Reception Office. ‘They still need to eat, have accommodation and food for their children. They’ve got the same health issues as any other community.’ Having no documents excludes asylum seekers and refugees from accessing relief.

She added that bank accounts get frozen when the necessary documents expire so they lose access to any funds they may have.

Rajah cautioned that the virus does not discriminate on the basis of nationality, emphasising ‘we need to treat the “other” how we would like to be treated.’

The webinar was facilitated by UKZN’s Professor Sihawukele Ngubane.