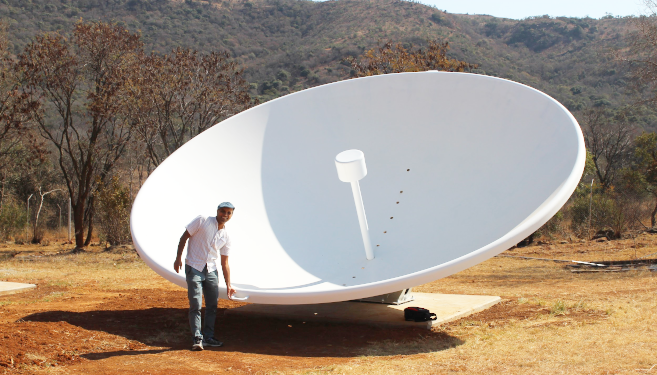 The Hydrogen and Real time Analysis eXperiment (HIRAX) project led by UKZN is achieving milestones on its journey towards the ultimate installation of a dish array at its site in the Karoo by deploying and testing two prototype telescope dish designs at the South African Radio Astronomy Observatory (SARAO) in Hartebeesthoek, Gauteng.

The prototypes, one made of fibreglass and the other aluminium, were designed and manufactured through a partnership between NJV Consulting and Rebcon in Durban, and MMS Technology in Pretoria, and funded through UKZN and the Department of Science and Innovation through the National Research Foundation. The companies collaborated closely with fabricators and scientists to optimise and streamline materials and processes.

The HIRAX project aims to map almost the entire southern sky using high intensity hydrogen mapping to detect baryon acoustic oscillations (BAOs), remnant of the distribution of early galaxies imprinted by sound waves that can assist with measuring the expansion history of the universe, illuminating the nature of dark energy. This will involve investigations into fast radio bursts (FRB) and pulsars, both transient radio sources. To achieve this, the project requires custom-built dishes that will remain stationary with periodical maneuvering to expand coverage of the southern sky.

Ultimately, 1 024 of these dishes will be installed in an array at the HIRAX main site within the Square Kilometre Array (SKA) in the Karoo, an important development towards being able to conduct research into the evolution of dark energy, a mysterious force that scientists believe may be causing the expansion of the universe.

HIRAX began collaborating with local firms in 2018 to develop the final dish specifications required for the project. The precisely-designed six-metre dish prototypes can be manually re-pointed every few months, a cost-effective approach, to allow the instrument to map a third of the sky over a five-year period. The dishes are currently being assessed at SARAO so that final requirements can be developed for the first 256 dishes to be installed in the Karoo.

The cutting-edge HIRAX project has been hailed as an important development in South Africa’s efforts to lead in the global astronomy landscape and foster collaboration between scientists.

Principal Investigator, Professor Kavilan Moodley emphasised HIRAX’s efforts to build technical capacity in South Africa through collaboration between the scientific community and industry. The project team plans to manufacture its dish hardware and subsystems in the country, develop big data analysis tools here, and employ local contractors for deployment of the systems.

SARAO Hartebeesthoek has provided important professional support, lending their expertise and experience to the dish installation and testing of the two prototype designs.

The MMS fibreglass dish can tilt to 30 degrees either side of its zenith, and was designed both for high performance and reasonable cost, with a low mount for easy adjustment and a thin dish.

The NJV Rebcon aluminium dish was developed for practical assembly, disassembly, transportation, installation and serviceability, with laser-cut elements that ensure parabolic accuracy, and an innovative design that is fully recyclable. The fixed dish can tilt down as far as the horizon.