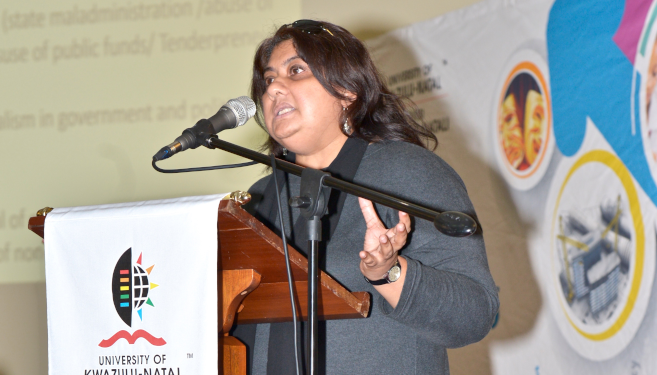 Academic and community activist Dr Lubna Nadvi participated in a webinar on the South African government’s response to COVID-19.

The Centre for Civil Society (CCS) in the School of Built Environment and Development Studies hosted a webinar on South Africa’s COVID-19 Response and Political Leadership.

The presentation was handled by UKZN academic Dr Lubna Nadvi, who teaches and conducts research in the field of Political Science and International Relations in the School of Social Sciences. Nadvi is also a community activist and comments frequently in the mainstream media on current affairs.

‘The response by the South African government to the challenge of COVID-19, has received mixed and varied responses,’ said Nadvi. ‘While President Cyril Ramaphosa and his cabinet have been largely commended for their swift action in putting various measures in place to address the issue of the spread of the novel coronavirus, the consequences of some of these measures and the decisions taken by the Coronavirus Command Council, have drawn sharp criticism from broader civil society.’

She further explored some of these measures as well as criticisms levelled against them.

‘The willingness of the Health Minister Dr Zweli Mkhize to speak to the media and issue detailed briefings regarding COVID-19 in the early days of the pandemic in South Africa, was important and necessary in enabling information to circulate quickly and as effectively as possible,’ said Nadvi. ‘Unlike other countries, where the state and government moved very slowly to put measures in place, the quick action by the South African government is to be commended. It became evident from the early briefings that the government - in particular the Department of Health - had started preparations to respond to and manage COVID-19, before the first case in South Africa had been identified.’

Nadvi noted that many aspects of the lockdown process had resulted in serious and unfortunate consequences, which had cast shadows on the government’s handling of the pandemic. She believes the response was clouded by lack of consideration about the ways in which many of the lockdown measures infringed on human rights guaranteed by the South African Constitution.

‘The people who have lost their livelihoods and jobs and continue to struggle from food insecurity and other challenges need to be made a priority in terms of financial support from both public and private sectors. Military and law enforcement personnel who are responsible for the deaths of civilians during the enforcement of the lockdown must be held accountable,’ said Nadvi. ‘The issue of people having criminal records to their name, due to minor infringements must be reviewed.

‘Ministers who have abused political authority must also be held accountable, while those who have lost their lives due to the virus must be remembered through online and other forms of memorials.’

She also noted that there had been some positive moments emerging during the past few months. ‘Ordinary South Africans and residents have shown incredible support and dedication towards fellow human beings in terms of getting involved in the distribution of food parcels, PPE and other essential items, helping those who need it most,’ she said.

‘The South African government has, despite its many mistakes, been proactive in trying to contain the spread of the virus, using medical science to shape its responses. Its political excesses and abuse of power, however, have to be called out by civil society and individuals held accountable.’