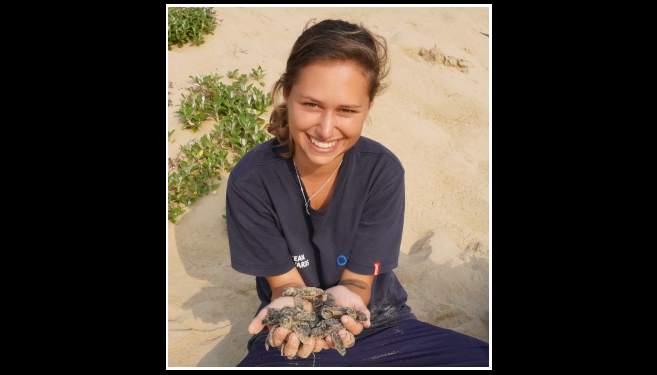 Ms Natalie dos Santos with a handful of loggerhead turtle hatchlings as she collected data about the new arrivals.

A UKZN Marine Biology honours student’s experiences while doing research on the impact of climate change on sex ratios of turtle hatchlings has been published by journalism training agency Roving Reporters and online newspaper the Daily Maverick.

Ms Natalie dos Santos did the research at Bhanga Nek in northern KwaZulu-Natal in 2019 and earlier this year, recording the highlights in an essay.

She is a member of the Roving Reporters environmental journalism training programme, Developing Environmental Watchdogs, and the WildOceans Ocean Stewards programme which collaborates closely with UKZN’s Marine Biology division at the School of Life Sciences (SLS).

She is comparing loggerhead nest temperatures to those detailed in a similar study in the 1980s to determine whether climate change is affecting the South African turtle population. Since nest temperatures determine the sex of turtles, the ratio of males to females is a useful indicator of changes in climate.

While collecting data for her study, dos Santos joined a team of volunteers from NMU at the research station near Kosi Bay, spending the better part of four months walking an idyllic 5km stretch of beach to seek out nesting loggerhead and leatherback turtles and later, their hatchlings.

Work took place at night while turtles were laying; some nights the group spotted up to 10 loggerhead turtles, and the occasional leatherback. Days involved completing chores, reading research papers, exploring the shallow reefs on their doorstep, and experiencing a few rare visits from day nesting turtles.

Dos Santos’s fieldwork involved the placement of temperature probes known as iButtons, small devices protectively concealed in ping-pong balls, at points along the beach and directly into the nests of loggerhead turtles while they were laying.

After the incubation period of 60 days, dos Santos returned to retrieve the iButtons, designed to be inconspicuous so as not to attract the attention of poachers. Using GPS markers, teams hunted down and dug out the iButtons, a challenging exercise as tides and winds had shifted the sand and the markers. After trying various techniques, including using a metal detector, half the probes were recovered, some of which were faulty, but dos Santos said much was learned to improve future studies using iButtons.

This visit also involved nightly foot patrols; dawn shifts to spot nests about to hatch; and measuring, weighing, DNA sampling, and recording distribution of the hatchlings. The researchers and volunteers returned hatchlings to their nests or released them into the sea to begin their “lost years”, where they all but disappear until returning to their feeding habitats as juveniles.

Dos Santos appreciated the impact Bhanga Nek and its wildlife, people and seascape had on her, saying she was grateful for the opportunity given to her by WildOceans and her supervisors to conduct research and contribute to turtle conservation efforts.

‘I hope this is the start of something big and meaningful for my career as a marine scientist, and I hope to see the hatchlings I watched crawl into the ocean come up the beach in 30 years’ time,’ she concluded.